The Mohinga At This FiDi Fast Food Joint Is A Diamond, Er, Sapphire In The Rough 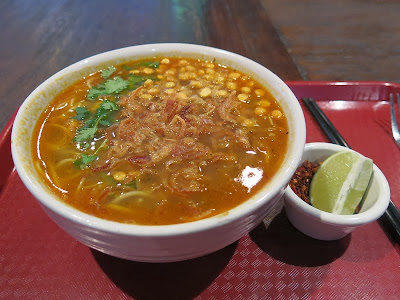 When you walk into Sapphire Asian Cuisine in the heart of the Financial District you'll be greeted by the sight of a line passing the cafeteria-style steam table displaying glistening entrees (one item with rice, noodles or vegetable for $6.59, two for $7.59 or three for $8.59).  Your expectations, understandably, might not be high, especially if you've read the pithy caveat of one Yelper:


"The concept is quite similar to Panda Express yet the food isn't even a tenth of Panda's taste and is instead 3/2 the greasy fattiness. Again, I love greasy fattiness but I love it only when it tastes amazing! Usually greasy fattiness and delicious taste tend to go hand in hand (it's one of those culinary unfairnesses) but it was quite far off here."

Fortunately there's a benign "gotcha" here in the restaurant name's extension, "....Taste of Burma." This taste is not found in the Orange Chicken, Broccoli Beef or Thai Basil Pork from the steam table, but in an a la carte menu above the steam table, titled "Made to Order." Made to order (or at least assembled to order) they are, and include a range of Burmese classics like Mohinga (catfish chowder), coconut curry noodle soup, samusa soup, tea leaf salad, rainbow salad and  Shan tofu salad, to name a few.

I chose to first test the mohinga, because a) this is a noodle blog, b) mohinga is considered Burma's National dish and therefore merits one's first attention, and c) I've been on a fishy soup kick lately in any event. I placed my order with the cashier, paid, and found a table where I waited for it to be brought to me, which happened about 10 minutes later.

Mohinga is a chowder made from shredded catfish in a lemongrass-infused broth thickened with yellow chickpea flour, served with rice vermicelli noodles. Garlic, onion, ginger and fish paste and/or fish sauce are also typically used in the broth, and the dish is served with a variety of garnishes which may be already included or served on the side. 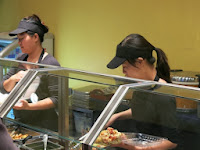 My mohinga arrived with a small dish of crushed red chili peppers and a lime wedge on the side. Toppings on the soup included the obligatory cilantro, spring onion tops, fired onions and what appeared to be bits of samusa skin.  As an added bonus, sliced hard-boiled eggs and yellow chickpeas, which are sometimes optional add-ins at extra cost, were included in my $6.59 bowl of soup.

After tasting the broth, which was complex, citrusy, and slightly fishy, I added a squeeze from the lime wedge and half the crushed dried chilis (which were joined later by the other half).  Although not a lot of tangible shredded catfish was evident, and the noodles were a little too soft (as they could hardly escape being, given their thinness) it was overall a very stout bowl of mohinga, with a broth that was as good as I have had, and well worth returning to. And there wasn't a touch of greasy fattiness (of either the good or bad variety) to it. 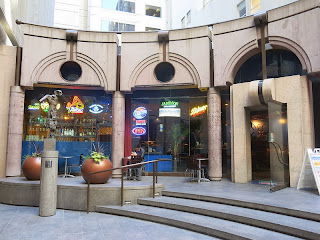