A Cool Mie Tek Tek "Kuah" At The Lime Tree 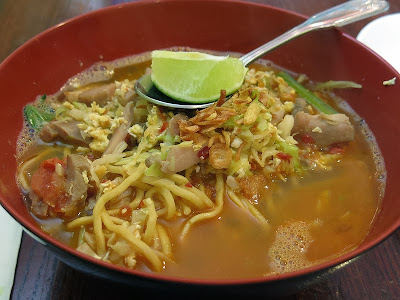 I was looking to add an Indonesian arrow to my quiver of noodle experiences in the form of Mie Tek Tek and my immediate choices were the venerable Borobudur, it of the $28 rijsttafel, or the newer, more snackish The Lime Tree.  Since Mie Tek Tek is a quintessential  Indonesian street food, the $7.99 version in the casual, fast food-like confines of Irving Street's The Lime Tree seemed a more appropriate choice that the $10.50 version in the more imposing downtown restaurant.

That mi tek tek is a street food above all is evidenced by its very name.  While "mie" simply means noodles, referring to the yellow egg noodles always used, the "tek tek" refers to the sound of  itinerant street vendors tapping their woks with their spatulas to announce their arrival. There are two types of mie tek tek: mie tek tek goreng, meaning "fried" (think chow mein) and mie tek tek kuah, meaning "in soup." 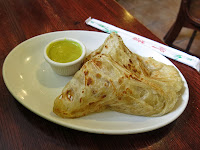 While more often than not "mie tek tek" without qualification refers to the fried version, the "Mie Tek-Tek" on The Lime Tree's menu board is "egg noodle, chicken and vegetable in spicy soup," or mie tek tek kuah, as qualified by its description.  Along with my mie tek tek I ordered a roti pratha, a layered flatbread which came with a green curry dipping sauce.

At The Lime Tree, You have the option of ordering your soup mild or spicy, though "spicy," as I ordered it, means "not very." There are no condiments on the tables, so it's advisable to put in a request when you order for "extra spicy" if that's what fuels your boat. The not-too-spicy broth came with a copious amount of yellow ramen-like egg noodles, topped with shredded chicken, tomatoes, fried shallots, pickles and crunchy cabbage that I could  detect.  The noodles were nicely chewy, the topping were a nice mix of textures from sost and tender to crunchy, and overall it was a comforting, belly-pleasing bowl, lack of chili assertiveness notwithstanding.

My only previous mi tek tek experience was with a goreng (pan fried) version served an an Off the Grid event by Sataysfied.  That one, topped with soft-cooked quail's egg, was comforting in a blander way, more  like a pancit offering than a spicy East Indies effort.  I'm not sure it was intended that way, but noodles are noodles and I like them all. (Well, almost all.)