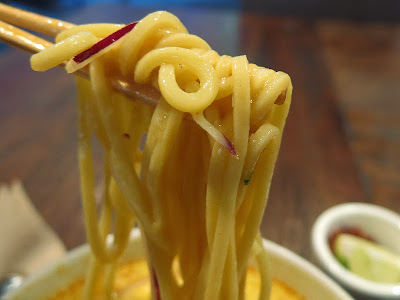 The color of the Burmese noodle soup called Ohn No Khao Swe comes from turmeric, not saffron, but eating it at Sapphire Asian Cuisine today had the 1966 Donovan hit playing in my head (where it's still playing as I write). I've blogged previously about Sapphire Asian Cuisine, the Chinese food steam table joint with a separate menu of made-to-order authentic Burmese food as a seeming afterthought, and of Ohn No Khao Swe, the dish that by all measures should be ranked a close second to mohinga, the catfish chowder considered Burma's national dish.

As was the case with Sapphire's mohinga, their version's broth was as good as any I've tried, even if some solid ingredients had a more meager presence than in some more expensive versions elsewhere. In particular, very little chicken is to be found it it, with as much of the protein coming from the boiled egg slices and the yellow chick peas. It's simply called "Coconut Noodle Soup" on the menu after all, and there is a separate "Chicken Noodle Soup" (which I have yet to try) which presumably has more chicken. The broth. on the other hand, was a remarkable "mellow yellow" mild curry delight which yielded happily to enhancement by the addition of some red chili flakes and an extra squeeze of lime.  Needless to say, I drained the bowl.

Here's a video lesson on making Ohn No Khao Swe, taught by none other than Yadana Nat Mai, alias June Bellamy, last princess of Burma:

Another video lesson for making Ohn No Khao Swe from the younger generation, in the person of London blogger/author MiMi (@Meemalee on Twitter) and a favorite resource for Burmese food knowledge: