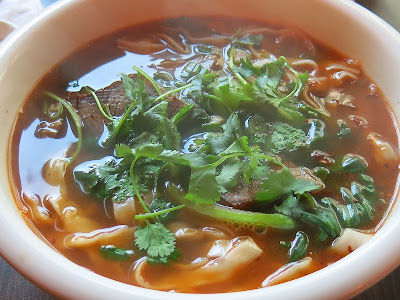 I hadn't had a bowl of noodles, not even home-cooked, for nearly a week and so my internal GPS directed my feet toward House of Xian Dumpling, even though it wasn't lunch or dinner time.  My choice this time was Braised Beef Noodle Soup, with "hand-pulled flat noodle," i.e. biang biang style, if you will. 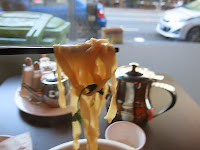 It was 4:30 in the afternoon and uncrowded, so my bowl of soup came with alacrity. It came well-adorned with cilantro and some stalks of bok choy lurking in the depths of its broth, which seemed more beefy and less medicinally aromatic than the broth in the beef tendon noodles I had on a previous occasion.  As with my first experience, though, the broth had a nice default level of spice heat.  It was certainly not Spicy enough enough to melt your face off, but spicy enough to tell you the chef is in charge here.  The beef, which appeared to be brisket, was lean, tender, and plentiful, though on balance I think I prefer the chewy beef tendon from my first visit. On the other hand, I definitely prefer the wide noodles, especially when cooked perfectly "QQ," as the Taiwanese say. Next time I will have the right combination in mind.

In my first post about this restaurant, I remarked that much of the ambitious menu seemed to be under construction. The proprietress, who must have seen my blog post, made a point of telling me that most of the menu is now available. As this would include the likes of xiao long bao, shengjian bao and xian doujiang, I can see myself returning frequently (but always reserving room in my belly for hand-pulled noodles).