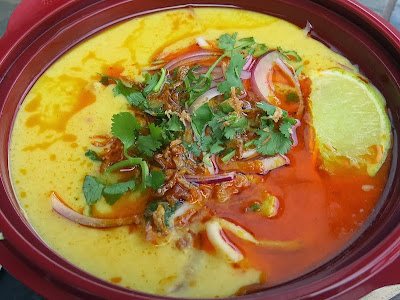 I've blogged before about my initial encounter with Ohn No Khauk Swe' (a. k. a. Ohn No Khao Swè and other romanizations) and how the Burmese Kitchen version endeared itself to me despite my not being a big coconut fan.  It's a dish that seems tailor-made for cool weather (despite the fact that Burma has precious little of that) and today's slight crispening of our Indian summer's air was excuse enough to intercept the Lil Burma food truck at SoMa StrEat Food Park and try its version on my way to Costco. 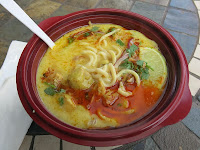 As described in my earlier post on the dish, ohn no khauk swe is a chicken noodle soup that features wheat noodles in a mildly curried, turmeric-tinged coconut milk and chicken stock broth thickened with garbanzo bean flour. Garnishes include cilantro, lime, shredded red onion, fried shallots, chili oil and presumably fish sauce. Sit-down restaurants offer hard-boiled egg slices and fried split peas as optional add-ins, but were these were not offered in a food truck environment. 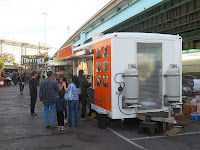 Overall, Lil Burma's version stacked up well to the restaurant version I previously enjoyed, being rich hearty, and savory. As served, it was perhaps too timidly spcied, but extra chili is available for the asking, which I will certainly do on a return visit. The noodles were a little soft to my tastes, perhaps a victim of food truck logistics, or of my ordering past the lunchtime peak. These small faults aside, it was rewarding enough to keep me enthusiastically on the ohn no khao swe trail, which will lead me to other Bay Areea Burmese venues .