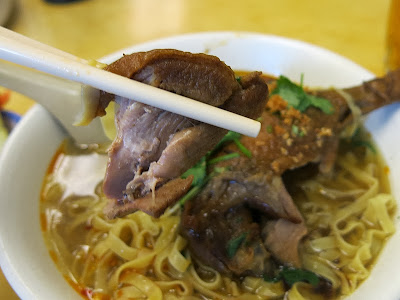 I've established a personal tradition of having duck for my fowl of choice on Thanksgiving, and with the jury (of Shanghainese in-laws) still out on dinner plans, I decided to get a leg up at lunchtime with a trip to Hai Ky Mi Gia. 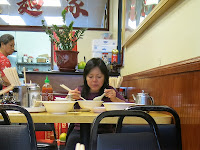 Hai Ky Mi Gia, which I previously visited in an official blogger capacity for the mee pok, is a Chaozhou Chinese (by way of Vietnam) establishment in the Tenderloin  that ranks up there with Chinatown's San Sun as one of the great bargain dedicated Asian noodleries of San Francisco.  More than any other eating establishment in town, it is associated with duck legs.  Though only three of the 31 soups on HKMG's menu feature a braised duck leg, nearly 60 percent (29) of the last 50 Yelpers to review it mention having (or having had) one of them.  Hai Ky Mi Gia is a hole-in-the-wall-and-a-half is size and is always busy, so that adds up to a lot of duck legs.  You can get the braised duck leg with wontons and noodles, ho fun noodles, or egg noodles (choice of thick or thin). You can also get a duck leg on the side, in case you want a two-legged bowl of noodles.

I hadn't bothered to check if HKMG was even open on Thanksgiving Day, but was guessing that they were. At it turned out, they were open for lunch but closing at 3:00, as were some others of their Larkin St. noodle neighbors. When I arrived at 1:30, the restaurant was packed, and I had a short wait before I was given a seat at a communal 6-top. 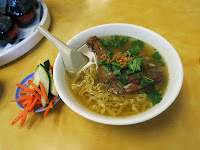 As is probably evident to readers of this blog, I have a bias toward wheat noodles over rice noodles, and for robust noodles over dainty ones, and  predictably ordered the braised duck leg with wide egg noodles. Hai Ky also offers the option of having your noodles "dry" (i.e. broth on the side) but I figured getting the duck leg in the full soup would ease the task of stripping the meat off the bones by softening it further. I'm also a noodle eater who typically drinks the bowl dry (after playing with spicing up the remaining broth) and looked forward to the duckiest possible infusion.

It took about 10 minutes for my bowl of noodles to arrive, accompanied by a small saucer of carrot shreds and cucumber slices.  After tasting the broth, I added a little chili oil and a couple of squirts of what I think was oyster sauce from an unmarked mystery squeeze bottle. I eschewed the carrot shreds and chewed the cucumber slices, but declined to add either to the bowl, which was adorned well enough with my favorite rabbit food, cilantro. 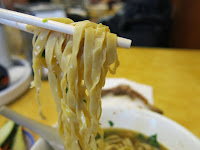 The duck leg in my soup was as advertised: lean, meaty and falling-off-the-bone tender (or at least easily pulled off the bone with chopsticks).  It was seasoned with what appeared to be five-spice seasoning, but delicately so, not so intensely as to taste medicinal.  The noodles, of which there was a copious supply, remained chewy to the end.  The broth was rich, tending toward salty, and chicken-y with duck overtones, more so than seemed to be accounted for by the presence of the duck leg. (What happens to the rest of all those ducks, anyway?) I emptied the bowl of everything but the bones, and left Hai Ky Mi Gia sated. It's easy to see why one or another duck noodle dish from this corner of noodle heaven ends up on nearly everyone's bargain bites list.