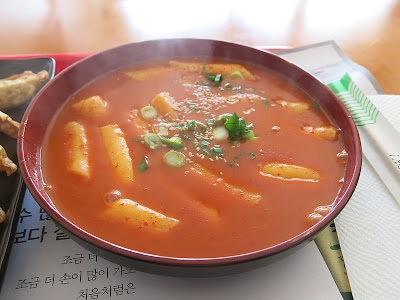 An earlier version of this post appeared in part in my other blog.  It occurred to me only tonight, while enjoying some Korean fried chicken along with a bowl of ramyun at Aria, that the tubular pasta used in ddukbokki emphatically are, in fact just big, fat rice noodles and worthy of Full Noodle Frontity's stage.

Ddukbokki (as fun to eat as it is to spell out) from Aria Korean-American Snack Bar is a recently discovered spicy treat for me. Aria is a mom-and-pop hole-in-the-wall that opened about a year ago in the space that held the venerable Old Chelsea Fish and Chips shop for nearly 50 years. Every time I've walked by it I have vowed to try the ddukbokki, dowel-shaped rice pasta akin to Shanghainese nian gao (which usually takes the form of flat slices), served in a spicy sauce, and finally got around to it a month ago. I had only had one previous ddukbokki experience, on the streets of Shanghai, of all places, and it was disappointing. The pasta was under-cooked and the sauce tasted mostly of catsup and was only slightly spicy). The Koreans had to do it better, I theorized. at Aria, I ordered the ddukbokki and an order of fried mandoo, the Korean version of jiaozi/gyoza. I wasn't disappointed. The ddukbokki had great body, firm and chewy, but not jaw-crampingly so. They came in a savory soup-like bath in a shallow dish. The sauce was honestly spicy and so good one could slurp it as soup, which I did, until the chili heat got to be too much. The ddukbokki at Aria definitely belongs in the comfort food department, especially if a moderate spiciness is in your comfort zone. 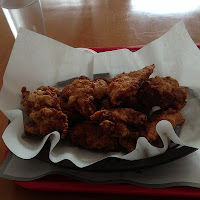 The shop itself is a joy, though tiny. There's barely room for two four-top tables and a two-top of sorts, so Aria does mostly a takeout business, like its predecessor establishment. It's not only the very definition of a hole-in-the-wall, it's also literally a mom-and-pop enterprise, with a beaming mom doing the cooking and polite, mellow pop taking the orders and manning the cash register.  I returned tonight to sample the snack bar's real raison d'être, KFC (which means Korean fried chicken hereabouts). With a side of spicy-sweet dipping sauce and the accompanying pickled daikon, it was as good as has been bruited about but that's a matter for another blog. I ordered it with a bowl of ramyun ("Korean ramen" on the menu).  This turned out to be underwhelming, little more than a bowl of instant noodles (most likely Nong Shim brand) gussied up with some fresh onion tops and perhaps some ancillary spicing. But not to worry; with ddukbokki designated a noodle dish by (my) decree, Aria Korean American Snack Bar has noble noodles to recommend it.