As I pondered the (hopefully imminent) re-opening of Turtle Tower in its new digs, I recalled some Chowhound.com posts about inner Richmond restaurant Quon Bac, which I'd never visited, also being a Northern-style Vietnamese restaurant of some repute. To add to my interest, Quan Bac's pho menu led off with Pho Bo Ngau Pin Dac Biet, or "combination beef noodle soup with bull 'pudendum'," an ingredient I've never caught up with in a bowl of noodle soup.

Settling into a seat at the comfortably appointed Quan Bac at Geary and 5th, I confidently ordered #38, Pho Bo Ngau Pin Dac Biet.  "We don't have that today," said the server, steering me to #41, Pho Bo Dac Biet, "combination of well-done, rare beef and beef ball noodle soup." Dac Biet is a term familiar to pho-goers, basically meaning house special, though to me today it meant "hold the ngau pin" and I wondered if they would have had it if I were not Caucasian. To accompany my noodles, I ordered an appetizer Cha Ca Chien,  or deep fried fish cake. 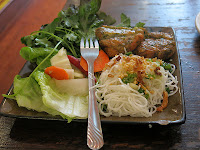 I've read comments in some quarters (which shall remain nameless) about Quan Bac being a little "pricey" but that's a canard, or in this case, bull bleep. My huge "regular" size bowl was $7.50. Imagine a bowl of, say, ramen anywhere at that price, especially one as huge as my bowl of pho, with as great a richness of animal flesh, residing in a delicately fragrant broth that you don't get mugged by. The fish cake appetizer might seem a dollar or two high in price at $7.25, but it came beautifully plated with a small mountain of vermicelli and enough shrubbery to feed a hungry rabbit; by itself, it would have made a light lunch for a finicky eater.

I thought both my pho (bull pecker or not) and my fish cakes were excellent. The pho's broth seemed perfectly balanced with no need for adding flavor-enhancing condiments (though I can never resist throwing in all the jalapeno slices), the meats were fresh and tender, and the flat rice noodles done just right. The fish cakes, though described as deep fried, were entirely greaseless and delicately flavored, and I much preferred them to the Thai version I had recently at House of Thai.

Quan Bac is a notch "nicer"in ambience and marginally pricier than the proletarian hole-in-the-wall Vietnamese restaurants in the Tenderloin that occupy a special place in my scheme of things; combining this with Quan Bac's value and authenticity, another question comes to mind: who needs places like The Slanted Door?