I finally got around to checking out Zen Yai Thai and am kicking myself for not starting to enjoy the charms of this Tenderloin gem sooner. If you've heard of Zen Yai Thai, you've probably heard of its secret menu of $2.50 "Boat Noodles" listed only in Thai only on the wall.  This "secret" is one known to nearly everyone who's been there or is planning to go there, and is even mentioned on Zen Yai Thai's English-only website as being for "adventurous eaters." In short, Zen Yai Thai's "secret" menu is about as secret as In-n-Out Burgers' is. 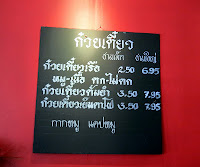 One thing that adds to the mystique of the secret Thai-menu-only fare is the fact that the broth in boat noodles is thickened with animal blood, but don't fret; you wouldn't even know it was there if you didn't know if it was there, to coin a phrase. (You can also request it be made without blood, but you'd be losing a dimension.) The blood is blended with a thick broth made from boiling beef bones to make a rich smooth puddle that is almost a tare for the noodles and their toppings to sit in, waiting to be strirred.  You have a choice of noodles, either the thin "pad Thai" type or broad rice noodles (the default) and can choose the degree of spiciness. I went for the fat noodles and answered affirmatively to "a little spicy?" which was proffered too literally; next time I'l reply "a lot spicy."

To the noodles, sitting in the broth, are added slices of steak, meatballs, crushed peanuts, onion, pork cracklings, cilantro and what appeared to be boltonia. A tray of condiments is brought to your table th dress up your noodles as you will. (It thankfully includes chili paste.)   In addition to beef, there is also a pork version and a tom yum version of the boat noodles, They are available in large bowls. but the practice is to order two or three small bowls of noodles to take advantage of different flavors. (In addition to the boat noodles, small bowls of tom yum and yen ta fo are available for $3.50.) I ordered small bowls of both beef and pork boat noodles, not knowing the serving size going in, but could have easily handled three as a comfortable lunch.


The boat noodles turned out to be exhilarating melanges of flavors and textures: sharp, sour, and slightly sweet broth, and crunchy, chewy, and soft add-ins. The venue is comfortable and casual, the service cheerful, and the opportunity to linger over two or three bowls of noodles, perhaps with  some Thai BBQ  or a cucumber salad in such an environment is little short of paradise.  It's a little like dim sum for noodles, and that would be my idea of paradise.

I am indebted to Leela Punyaratabandhu of http://shesimmers.com/ for this translation of Zen Yai Thai's wall noodle menu: 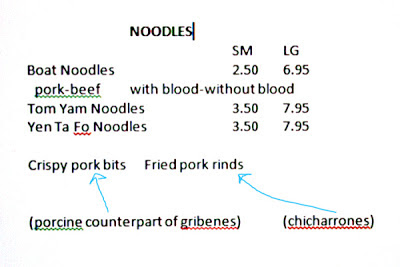