Bowled and Beautiful: Yen Ta Fo From House of Thai 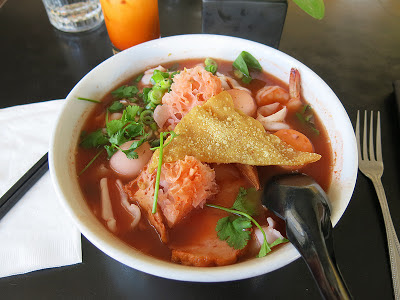 I headed for the Tenderloin today, intending to check out the mi quang at Ngoc Mai, the only place in town I know of that reputedly makes a good version, but Ngoc Mai had closed for vacation for the next two months, and I soon found myself at the door of House of Thai, née Thai House Express on Larkin. After some head-scratching, I decided on a go at House of Thai's yen ta fo.

It was an appreciation of yen ta fo at Lers Ros Thai that inaugurated this blog nearly three years ago, and I was eager to revisit this pink marvel once again, to compare HOT's version with LRT's, insofar as my memory (and initial blog post's assessment) allowed. I won't belabor the dish with excessive explanation again, except to say it's a seafood (and sometimes pork) intensive rice noodle dish with a pinkish red broth derived from fermented, red rice colored tofu, sometimes with an assist from tomato sauce. 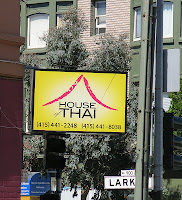 House of Thai's menu describes their yen ta fo as "Shrimps, squid, tofu, fish balls and shrimp balls and spinach in secret bean curd sauce soup." Greenery is added in the form of both water spinach and cilantro. In comparison with Lers Ros Thai's version, I'd have to say I was bowled over (so to speak) by the quantity of fishy matter delivered by House of Thai. Elsewhere in this blog I described a chao ma mian I reviewed as a "Chinese cioppino;" the bowl I had today could be called a "Thai cioppino," even down to its color. Not itemized on the menu were a couple of masses of white fungus, which had little flavor other than what they absorbed from the broth, and added a verticality to the presentation which enhanced the dish's overall attractiveness. The fish balls, shrimp balls, fried tofu and the one solitary large shrimp in the soup were tasty and not overcooked. The broth, compared to what I recall of Lers Ros Thai's version, was less spicy (always remediable via the condiment tray), slightly sweeter and more tomato-ey. It's a fair bet one of the ingredients in the house "secret sauce" is either tomato sauce or Thai ketchup.