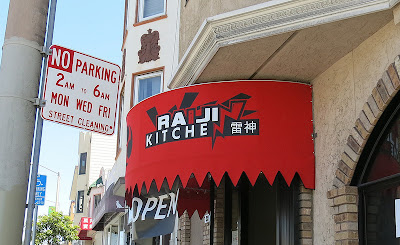 It's called Raijin Kitchen, but wants to roll off my lips as Ragin' Cajun, which is understandable since raijin means God of Thunder in Japanese (no crawdads here, though).  It opened on Taraval St. in the Parkside about a week ago in the space that formerly held a gelato and crepe shop. Raijin Kitchen serves ramen and Japanese curry, and is located in the middle of what I see as becoming a noodle and dumpling corridor stretching from House of Pancakes and Shandong Deluxe on the east, to Kingdom of Dumplings on the west. (I can dream, can't I?)

[Update: I found a Facebook page for Raijin Kitchen, which reveals that Raijin Kitchen is a sister restaurant to Men Oh Tokushima Ramen and Waraku Ramen, both of which I've blogged about before.]

Raijin Kitchen has the feel of a real ramen-ya. It's tiny, with a limited menu and a focus on ramen. You walk in, place your order, pay up and take a seat and wait for your noodles to be brought to you. Yes, there are some curry dishes, sides and beverages, but no up-sell.  It's a place you can feel comfortable sitting down with just a friggin' bowl of ramen to commune with. 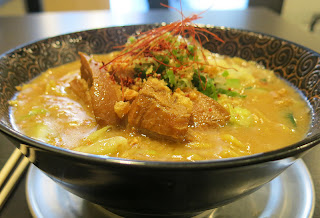 There are four ramen choices on Raijin's menu: Raijin Ramen, Tan Tan Men, Curry Ramen, and shoyu ramen. I ordered the Raijin Ramen (presumably the house special), which turned out to be a tonkotsu ramen, with perhaps a bit of shoyu blended in (it was a shade darker than a typical tonkotsu broth, though there was no telltale soy sauce saltiness that I could detect).  The broth was as thick as any I have experienced, almost gravy-like, and to make the dish even heavier, the chashu was in the form of a whole mountain of streaky pork belly (look at the cross-section and you'll see bacon). This is definitely a cool weather ramen, made for the Sunset for days like today when it was chilly at 23rd & Taraval even while hot downtown. The broth overall was rich, though not cloyingly so, and very filling.  The noodles, on the large side for ramen noodles, were not quite as chewy as I would like, but not a disaster, by any measure.

Perhaps the best thing about Raijin Kitchen is its pricing. If you are tired of forking out $12 or more for a bowl of noodles, take heart: nothing on the menu is more than $7.95, including my house special Raijin Ramen, and two of the ramen choices are a dollar cheaper.  That alone will get me back to try the other ramen options.