A couple of weeks ago I stumbled across new Tenderloin restaurant Red Chilli, self-identified as an Indian Nepalese restaurant, in its "Grand Opening" phase. I had just eaten lunch, so I filed it in my now-faulty memory banks.  It was only when it showed up in Yelp's New Business Openings listing today that I remembered I had forgotten about it. Did it have momos on the menu? Yes indeed, and since I am on a perennial momo hunt I decided to check it out at lunchtime.

Momos are Tibetan-Nepalese-Bhutanese dumplings with meat or vegetarian fillings that come in a variety of shapes and sizes and are analogous to a number of Chinese dumplings. Red Chilli's hand-made momos come in the familiar crescent shape similar to Japanese gyoza or (some) Chinese jiaozi/pot stickers, and a choice of chicken or vegetarian filling is offered. (Red Chilli serves Halal food, and all entrees are either vegetarian, chicken, or lamb). They come ten to an order, accompanied by a house-made dipping sauce.  Together with a small bowl of lentil soup, an order of Red Chilli momos made for a substantial lunch. 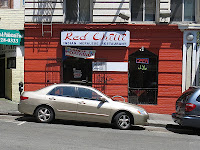 Red Chilli's momos reminded me of those I've had at a number of places in New York's Jackson Heights, where crescent-shaped dumplings seem to prevail; Binita Pradhan (see below) tells me this is the traditional Tibetan style.  The nicely spiced, finely minced chicken filling and slightly chewy thin wrappers brought back memories of 74th & Roosevelt, and I'd say that Red Chilli's were as good as any I've had in Queens.  The house dipping sauce, too, may be the best I've had with this style of momos. Red Chilli's momos are as good an introduction to Tibetan-style momos as you are likely to find in San Francisco. There are a lot of other items to try on Red Chilli's menu, of course, and I plan to return for more. The menu includes useful explanations of items, and Nepalese specialties are flagged. 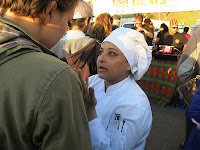 My momo lunch put me in the mood to drop by Off the Grid: Fort Mason Center to say hello to my Nepali friend Binita of Bini's Kitchen, and maybe talk momos.  She, of course, twisted my arm and I ended up with an order of her turkey momos for an early dinner.  Bini's Kitchen's hemispheric momos were the traditional Nepali shape, she said, and she prefers them because they hold more filling (confirmed by what I recall from my 10th grade Solid Geometry class). The amount of filling in eight of Bini's bigger, more pillowy dumplings exceeded that of the ten crescent shaped ones from Red Chilli, and was just as savory. If I had one request, it would be a little more spice heat in the orange sauce that topped the Bini's Kitchen Momos. 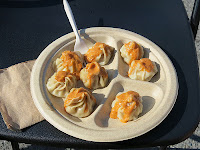 In New York I once sampled the momos at four different establishments, all in a short walking distance  from the same subway station, in the course of an afternoon. They were smaller servings, I recall six to eight per plate. That feat is not possible in San Francisco, but with 10 momos at lunch and 8 larger ones at dinner, I came damn close today.