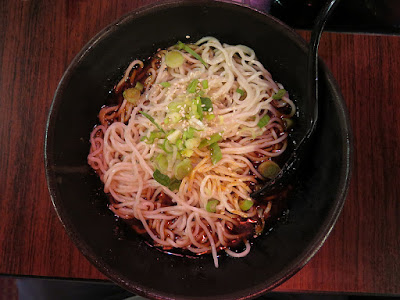 If had I told you I was headed out this noon to slurp noodles in a chili oil-based broth, you'd have thought me a liar, because I was wearing a white T-shirt, and as an accomplished noodle-slurper I am very punctilious about such niceties.  But I allow a certain amount of randomness in my life, and I did in fact end up Jackson Pollock-ing one of my favorite tees at Spicy Queen in the Inner Richmond. 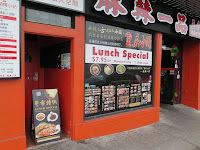 My conscious mission was to check up on the progress of the cuisine reassignment procedure being performed on Xi'an Gourmet (nee Shandong House).  It had undergone a Xi'anectomy and is to re-emerge into society as Shandong Best.  If the wraps were off I planned to catch up with the Qingdao dumpling lady's latest creations and check up on what was new on the menu;  if not (as turned out to be the case) I knew there were plenty of other options nearby.

A short block to the west of Shandong Best-to-be, the garish facade of Spicy Queen (a. k. a. Spicy Hotpot) caught my eye.  Spicy Queen is a sister of Chinatown's Spicy King, founded by a former Z&Y chef. I had eaten at neither, but the picture in the window of "Chongqing Hot Numbing Spicy Noodles" drew me into the place like a magnet, white T-shirt and all. 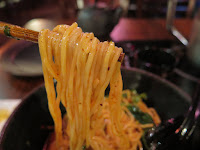 I started by ordering the Chongqing Numbing Spicy (ma la) Noodles and later added an order of pot stickers for additional protein.  The best attributes of my bowl were the in the noodles themselves, and the (temperature) heat of the dish.  The noodles, said to be hand-made (but not hand-pulled, judging from their uniformity of thickness) were sinewy wonders, a clot of them jammed into the bowl in a pool of sizzling hot red ma la (numbing and spicy) sauce made from a mixture of chili oil, Sichuan peppercorns, spices, and what appeared to be ground peanuts.  The noodles are then stirred to coat them with the sauce. 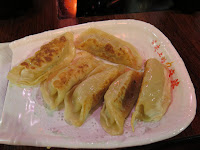 While "hot" was an accurate description of the temperature my dish was served at, it did not really  apply to the spiciness.  I had not asked about the degree of spiciness nor requested one, and the dish was far from being either as numbing or as spicy as I would have liked, though the "ma" and the "la" seemed nicely balanced (which. ironically, kept me from tossing in some chili oil, which might have upset the balance). I should have requested it spicy in the first place; this can be done successfully, I learned from a Yelp review which I read after my meal.

The pot stickers were a decent version, meaty inside and not too doughy, but not browned as crisp as I like. This may have been the fault of my timing; I ordered them just before the kitchen staff's meal break, and they may have been rushed.

Spicy Queen also has Guilin Rice Noodles,  Crossing the Bridge Noodles and even Wuhan Hot Dry (regan) noodles on the menu, so I have plenty of inducement to return.

As for my T-shirt? It's in the laundry. If Spray 'N Wash doesn't do its job, it's about to become an undershirt.