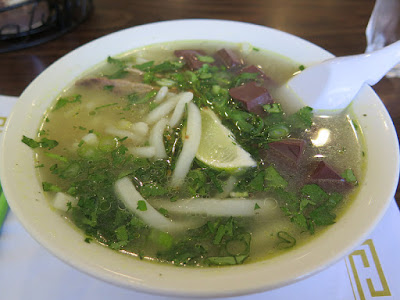 If you've been paying attention, you know that Lanxang Kingdom is the once a week Lao-or-bust pop-up hosted by Turtle Tower Restaurant on Thursdays, TT's closed day.  As a food-aware San Franciscan, you'll also know that Turtle Tower is our city's most notable North Vietnamese soup kitchen, and almost synonymous with pho ga, a chicken noodle soup which almost every visitor to Turtle Tower has tried.  It's only fitting, therefore, that Lanxang Kingdom should serve khao piak, Laos' counterpart to pho ga. Though not on the regular menu, it has been in LK's weekly specials rotation, most recently showing up this past Thursday when I caught up with it, my third shot at this Lao specialty following the versions I had tried at Champa Garden and Maneelap Srimongkoun.


Pho ga and khao piak have some things in common, including rice noodles (or rice and tapioca, in the Lao case) which are heartier that the usual vermicelli (bun) or pho noodles, and  rich broths whose schmalzy chicken-ness trumps Asian spicing for dominance; comfort over exoticism, because chicken soup will always be chicken soup.  With khao piak (like Ohio Amish chicken noodles) it's almost de rigeur for the noodles to be joyously house-made for the occasion and Lanxang Kingdom is no exception, as witnessed by the photo at the right of LK's noodle-making party.

In comparison with the previous two versions of Khao Piak I've tried, I found a remarkable familiarity and similarity among the broths, with Lanxang Kingdom's a trifle less muddy than Champa Garden's but not as thin as Maneelap's.  In the chicken department,  LK's offering, like Champa's, had boneless shreds, while Maneelap's used bone-in chicken.  Lanxang Kingdom's was the only version that included cubes of pork blood (optional at the point of sale).  All three versions would be equally valiant flu fighters. 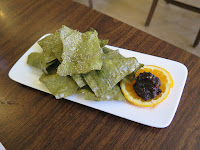 With my soup, I had an appetizer-sized  order of "Mekong Riverweed" (khay paen cheow bong) a broad seaweed-like leaf that grows in the Mekong River near Luang Prabang.  The weeds are fried crispy, seasoned and served with cheow bong, the delightfully spicy, smoky, savory chili paste. Kale, go away!