Return To Kyu3: A Strong Khao Soi With Oodles of Noodles (Ouch!) 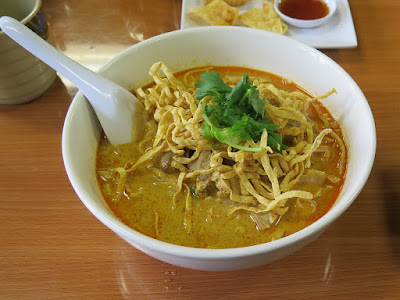 After my foray into the wilds of the East Bay for some spicy Guilin cowmeat noodles (see above), I resumed my tour of Tenderloin Southeast Asian noodle delights with another visit to Kyu3 Noodle & BBQ.  To make sure I wasn't in a rice noodle rut, I went for the egg noodle-friendly Khao Soi, confident of getting a strong version, based on my previous noodle experiences at Kyu3.  I was not disappointed. 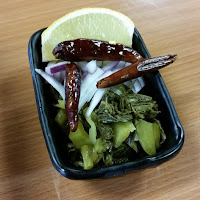 Kyu3's Khao Soi is listed simply as "Curry Noodles" on the menu, and described as "Egg noodles" (recommended) with chicken curry, red onions and pickled cabbage" but it was easy enough to recognize it as the  dish known in Thai as "khao soi," a fact confirmed by my server when I ordered it under that name.  It came, in typical KS fashion, with a topknot of crispy noodles for texture and cilantro as the primary color accent. The red onions and pickled cabbage, along with some dried Thai chilis and a lemon wedge came in a small dish on the side; all got added to the soup.

The curry broth in my Khao Soi came deep in flavor and nicely balanced, lacking the cloying coconutty sweetness of some versions. Its default spiciness, truth be told, barely registered on the Scoville scale, but server Tammy made a point of placing a jar of the house-made chili sauce next to usual condiment rack, and I got to assume the chefly duty of sexing  up the soup myself. Discretion, they have learned, is the greater part of avoiding bad Yelp reviews, apparently. 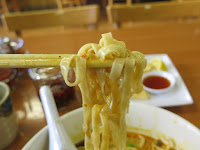 If Kyu3's khao soi had one distinguishing feature, it was the amount of  stuff in it, in the form of chicken and noodles (which is what we eat chicken noodles for, amiright?). There were large boneless chunks of tender, non-prefab chicken (both white and dark meat) and enough chewy, medium width egg noodles to fill two orders of soup at a stingier establishment.  I'm sure some people would complain about the noodles-to-broth ratio, but fortunately for Kyu3, there are never too many noodles for me. The sole drawback was that I had to eat about a third on the noodles before I could fully stir in the chili oil I had added. Then I had a nearly perfect bowl of chicken noodle soup.

While I was slurping my noodles, a young couple at the next table was feasting on some of the chef's crossover fare, including the delicious-looking squid ink fried ice. I made a vow to myself that on my next visit I would eschew the noodles (pun, get it?) and go for the squid ink fried rice and perhaps some takoyaki kushi for additional protein.

And I swear on a stack of Lucky Peach Magazines that I'll never write "oodles of noodles" again.