Back in January I blogged about the joy of house-made, er, truck-made noodles from Odang Udon,  a food trailer at an obscure small food truck venue, the Duboce Truck Stop. At the time I lamented the relative inaccessibility (to me, at least) of the spot; it's not on a major transit line nor in the vicinity of any of my customary destinations. 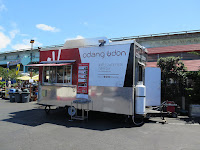 Fast forward to Summer, and my prospects for getting to know this noodle venue better suddenly improve.  As of the first of June, Odang Udon has become a regular fixture at SoMa StrEat Food Park, a location where it can get the business it deserves, and that includes mine. It's not only served by the Muni #12 line, which will take me there directly from Chinatown and the #9 line, direct from Market St. but is also across the street from Costco, a frequent destination of mine. Others will find convenient access via the Muni #47 line. 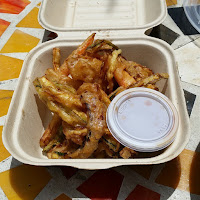 I made my first visit to Odang at its new location on June 1, and was drawn to the Curry Udon ("Fresh-made noodles, sweet Japanese curry sauce, tempura flakes, mushrooms, green onions, seasonal vegetable tempura") pictured above.  The noodles were thicker than the ones I had with the "Classic" udon in January but equally chewy and fresh, and the Japanese curry was characteristically thick and mildly spicy. The tempura was served on the side, as it was with the Classic curry on my first visit, but fresher and crispier than my first encounter, when I found it a little on the limp side  According to Odang Udon's signage, this dish can be made vegan. and I couldn't be sure that what I was served was not vegan or vegetarian.  The curry and its side of tempura is an order that should please vegetarian and carni-bore Japanese curry buffs alike.

I returned today (thanks to a Costco run) to try Odang Udon's most popular item, the City Odang ("Fresh-made noodles, chopped marinated skirt steak, cucumber, egg, kimcheee, special city sauce"). This is a "dry" noodle dish (sauced, but not in sou) and served without a complimentary tempura side. It is a protein bomb, with a very generous portion of marinated beef (which appears to have been grilled) as well as a fried egg. The skirt steak was tasty, the fried egg was, well, a fried egg, and the kimchi a mild version..  The noodles were the star, even chewier and thicker than those in Odang's curry udon, and the "City Sauce" they were doused with had a vaguely Italian cast  to it. Fuel it is, and high-powered fuel at that.