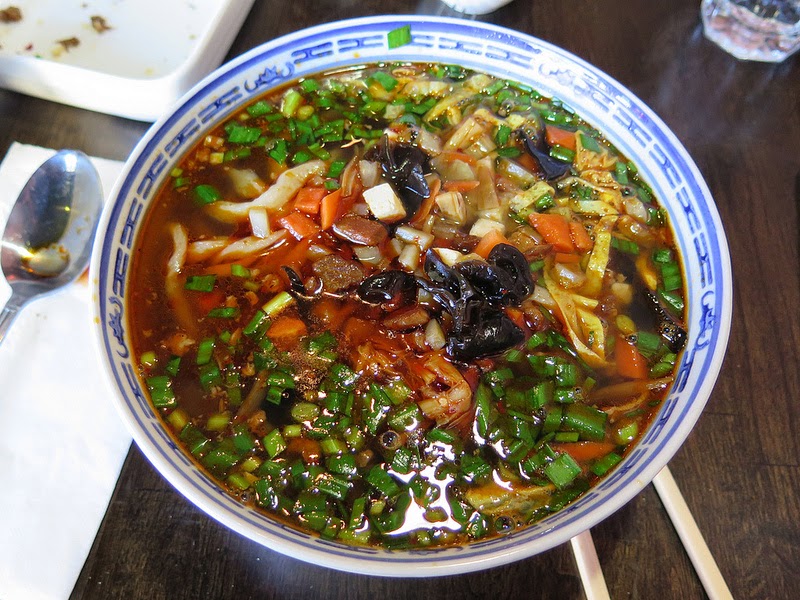 Yes, three of my last four posts have been about the same restaurant, but I do have an obsession with the cuisine of Xi'an and Shaanxi province, arguably the seat of noodle culture in China, and was eager to vet what I consider my three benchmark bowls for this cuisine at the recently opened Terra Cotta Warrior. (Not to mention that I was hankering for another lamb roujiamo.) The first two benchmark dishes, reported on above, are you po che mian and mian pi; the third, and perhaps the most spectacular is Qishan saozi mian, appearing in English on TCW's menu as "Qishan minced pork noodles."

Qishan saozi mian is a venerable dish, with a history of more than 2,000 years. It's actually named for Mt. Qi in Baoji, about 100 miles west of Xi'an in Shaanxi province, but claimed by Xi'an restaurants. It is somewhat inelegantly described by People's Daily Online thusly:


Qishan Saozi Mian (Qishan-style noodles with minced meat) has a long history. It began as early as in the Zhou Dynasty (1046 BC – 256 BC). It is a kind of noodles poured with pork soups (Saozi means diced meat) plus tofu, dried lily flowers, agaric, kelp, carrots and Chinese chives or garlic sprouts and tastes sour and hot, leaving people delicious aftertastes. Qishan Saozi Mian is well-known far and near for its “thin, pliable, smooth, sour, spicy, scented, hot, watery and greasy” features.

There are a lot of variances among versions, particularly in the type of noodle used, the prominence of the chili oil in the broth and the complexity of the toppings (the version at NY's Xi'an Famous Foods is somewhat lazy in that regard).  Some versions are served in a shallow bath of broth, others as a full-fledged bowl of soup. Pork is the standard meat ingredient, though beef or lamb may be used in muslim areas. 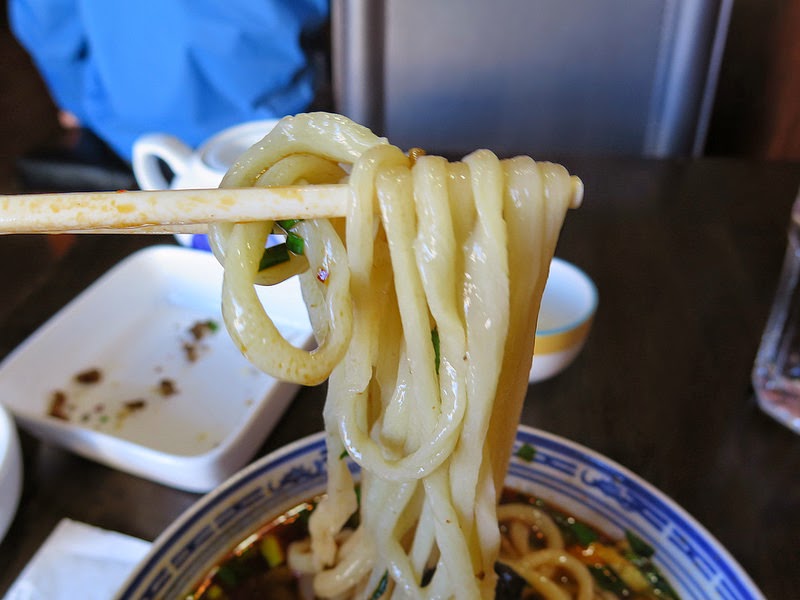 Terra Cotta Warrior's Qishan saozi mian uses long, fat, hand-pulled noodles in a soup bowl, and in general seems true to the form described by People's Daily in terms of it ingredients. It used finely minced pork (consistent with the vegetable cutting) and most or all of the vegetal ingredients called out (the "agaric" being wood ear mushroome).  I also detected doufu pi (a.k.a. yuba). I'm not sure about the kelp. Chili oil was used liberally, which did make it a little on the oily side, but heck, it's (presumably) vegetable oil. I'm guessing vinegar was also used as it was sourer than the garlic chives would account for. Overall, it was as intriguing taste-wise as it was visually, and a dish I'll be gad to return to.

The Qishan saozi mian at Terra Cotta Warrior came through for me and I've won the Xi'an trifecta!