It's not often I get coaxed outside the boundaries of San Francisco for some noodle goodness, but I couldn't resist the prospect of a family-style hole-in-the-wall Tibetan restaurant with a hard-to-find noodle soup dish.  The restaurant in question was Tashi Delek, in El Cerrito, and the noodle dish Thain Thuk. 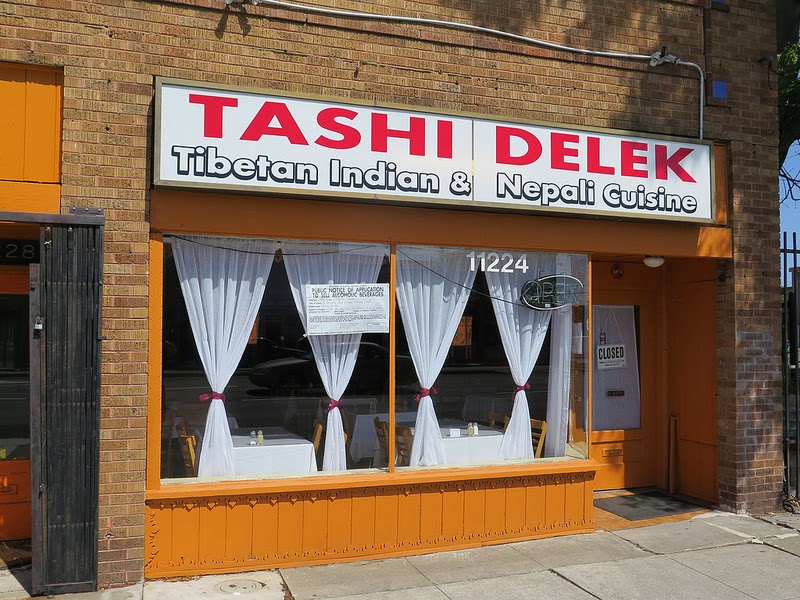 I found Tashi Delek a 10-minute walk south from the El Cerrito del Norte BART Station along San Pablo Avenue, next to a pupuseria called Taqueria El Salva Mex. Tashi Delek (the phrase is a generic Tibetan well-wishing greeting) promises "Tibetan, Indian and Nepali Cuisine" according to its store sign. (There are Bhutanese dishes on the menu as well; perhaps they couldn't fit Bhutan on the sign.)  Make no mistake, though, this is a restaurant that leads with its Tibetan foot, featuring dishes like the noodle dish I was seeking, and snack favorites beyond momos like shogo khatsa and sha bhaley which I've previously only scored from the Tibetans of Himalayan Heights, Queens, New York. The proprietors/operators of Tashi Delek are Kunkhen Sherpa and Pasang Lama, and I can't think of two better names to be getting my Tibetan food from.

Thain Thuk literally means "pulled noodles" and is pronounced something like "tain took." (With that knowledge, read the post title again and appreciate my pun.)  They're not the showy pulled noodles you may be thinking of, but flat strips of dough pulled thin, then torn into approximately rectangular pieces and tossed into simmering broth, a meat or vegetable stock with ginger, garlic, onion, tomato, spring onion, salt and a splash of soy sauce, according to one recipe. To this is added, along with the noodles, beef or chicken (or vegetables for a vegetarian version) and thin slices of daikon. A generous topping of spinach and cilantro completes the dish. 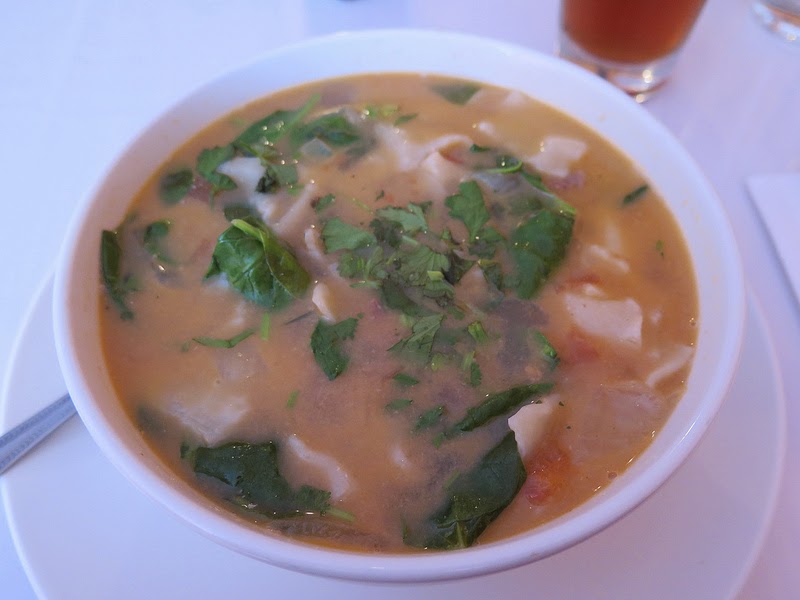 I ordered the beef version, based on the recommendation of Ms. Sherpa, who was the entire "front of the house" at that time of day on a Tuesday. When my bowl arrived, I first tasted the broth.  It had the depth and complexity one would expect, but was a little on the bland side, I thought. Ms. Sherpa, who watched me tasting it, read my mind and offered me a pot of chili paste. A couple of tiny spoonfuls made the broth right, and I tucked in to my thain thuk. The noodle pieces were delightfully chewy, and the beef bits fresh and rare, like you might get with a good bowl of pho, but thicker. Overall, it was a hearty and delicious soup, one that can, according to one website, keep the nomads warm during the long Tibetan winters.  It was El Cerrito and 65° F, but it worked for me anyway.