As I related in my other blog, I was delighted to discover that San Francisco gained some tasty new noodle options once San Dong House restaurant decided to maximize its use of its Xi'an-born chef's talents and re-invent itself as Xi'an Gourmet Restaurant. After absorbing that news I hastened there at the earliest possible opportunity, which happened to be immediately.

I decided to start the Xi'an Gourmet noodle drill with you po mian, since I would be getting my protein from a lamb roujiamo, which I was also there to vet. You po mian, a Shaanxi staple, literally means "oil sprinkled noodle," indicating that it is a tossed noodle.  It can be made with either a rustic thick round hand-pulled noodle (as is she case at Xi'an Gourmet) or with a hand "torn" flat noodle, as can be found at Xi'an Famous Foods in New York, in which case it is sometimes called you po che mian, the "che" meaning "torn". You po mian is (or can easily be) vegetarian
. 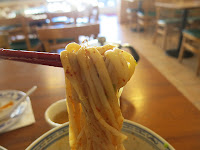 With my you po mian, the robust wheat noodles were a welcome change after several rounds of more delicate rice noodles or wimpy ramen noodles, and a reminder of why I love noodles in the first place. Thick and chewy as only freshly pulled noodles can be, they are first doused with a mixture of soy sauce and black vinegar, then topped with pieces of baby bok choi, scallions, garlic, ground dried chilis and other spices, and finally doused again with oil that has been heated to the boiling point, cooking the toppings and releasing the dish's fragrance.

The final step is to toss the noodles, costing them all with the fragrant elixir that has been created and EAT them, and that I did with alacrity, gusto, enthusiasm, relish, and glee.

The po che mian at Xi'an Gourmet were the equal of any I've had elsewhere, and I'll eagerly be returning to try the other Xi'an specialties on offer, noodley and otherwise.