Heading Back For a Cold One: Xi'an Gourmet's Liang Pi 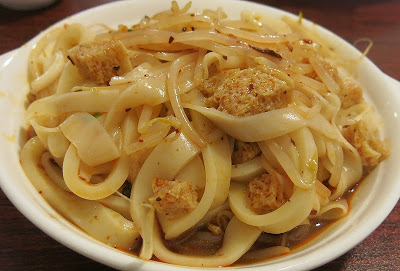 When my visits to New York coincide with a heat wave, I like to fight fire with fire and eat something spicy. More often that not, my lunch choice for this purpose in recent years has been the spicy cold noodle dish known as liang pi from my favorite Flushing hole-in-the-wall, Xi'an Famous Foods. Today in San Francisco both the temperature and the humidity were in the 70s, not exactly a tropical heat wave but close enough to New York weather to give me an excuse to return to Xi'an Gourmet and try their liang pi.

Liang pi, literally "cold skin" noodles are a Shaanxi specialty which is imitated in various versions throughout China. The basic Xi'an version consists of wheat starch noodles, bean sprouts, diced kao fu and a sauce that is both spicy and a little sweet at the same time. The making of wheat starch "liang pi" noodles is a fairly complicated process, but basically calls for rinsing the starch out of wheat flour, letting the starch settle to a paste, steaming the paste after the water is drained, then cutting the "skin" which is thus formed into ribbon-like noodles.  The thick, slightly translucent noodles somewhat resemble wide rice noodles , but for the flavor and color, and are always served chilled.

The liang pi noodles at Xi'an Gourmet are not as sensational as their New York counterpart, largely on account of a lesser complexity and spiciness to the sauce. It must be pointed out, however, that David Shi built his whole Xi'an Famous Foods mini-empire of his family's "secret recipe" sauces,and he is so proud of his liang pi that he adopted "Liang Pi" as a pseudonym which graces his business cards. While Xi'an Gourmet is no match for the King of the Liang Pi Hill, its liang pi is far from something to be ashamed of. It's a spicy, cool refreshing noodle treat for hot (or cold) weather, and, at $4.95, perhaps the best bargain in Xi'an specialties on the menu. It's also worth pointing out that chef, I'm told, will be happy to up the chili oil level on request.

For the record, I paired it with what might be the second best bargain on Xi'an Gourmet's menu, the $3.95 pork roujiamo. 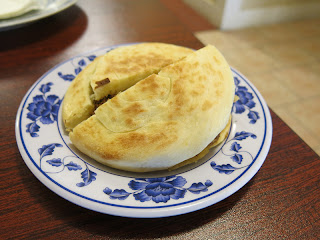