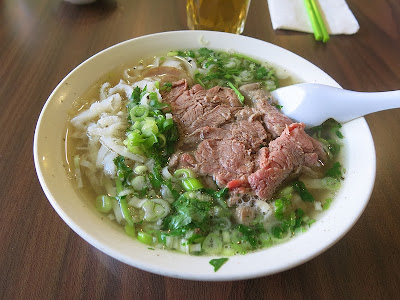 It had been  a couple of weeks since I'd had noodles in a proper bowl (not counting the Ju Ju Woman's home-cooked offerings) so I set out for the Tenderloin on a noodle quest.  My destination was yet another lesser-known hole-in-the-wall with a rarely found item on its menu but I found the restaurant (TBA) closed. (Closed on Wednesday, will I never learn to check?) At the urging of my growling stomach I abandoned my search for the new and exotic and headed for the safe haven of the recently relocated Turtle Tower.

At Turtle Tower I doubled down on pleasing my belly by choosing the Phở Bò Ðặc Biệt, along with a side order of Chả Mực, deep fried cuttle fish patty, for extra protein. Pho Bo Dac Biet is, essentially, the "house special" combination beef pho wherever you co, and I knew Turtle Tower, with its reputation, wouldn't put that tag on something it was ashamed of.  Turtle Tower's combination for dac biet consists of rare beef, "well-done" beef and tripe, arrayed on top of wide rice noodles along with the greens, as can be seen in the photo atop this post.  True to Turtle Tower's northern Vietnam orientation, the accompanying condiment dish contained only a lime wedge and some jalapeno slices (which I am always happy to use all of). The beef appeared to be good quality brisket, and the tripe was as tender as the beef.  The tripe seemed to add an extra flavor dimension to the subtle northern pho broth, something that probably would not be discernible in a more aggressively aromatic southern-style broth. Overall, it was a bowl of goodies that my previously complaining stomach gave two thumbs up to, if that is anatomically possible.

The previous weekend saw the annual La Cocina Night Market and San Francisco Street Food Festival, two must-do, if not noodle-rich, events.  At the Night Market I eschewed the chewy hand-pulled noodles from M. Y. China's chief noodle puller, having had them on several occasions in house at M. Y. China, but found a tasty (albeit disposable) bowl of Penang Prawn Noodles by Chef Alex Ong, late of Betelnut-Hutong-Betelnut.  These were not your father's Hokkien Prawn Mee, but a subtler dish consisting of a generous quantity of prawns in a mildly spicy broth with bean thread noodles. It was a very tasting and pleasing dish, but I found myself wishing for a condiment caddy with some  chili oil or chili flakes to add.

Saturday's San Francisco Street Food Festival featured more than 80 food vendors, but amazingly few instances of Asian noodles. In fact, outside of a ramen vendor which I'd previously tried,  I was only able to find one noodle offering to tempt me, but a good one it was: Bibim Guksoo (Spicy Cold Noodles in Kim Chee Sauce) from To Hyang, the celebrated home-style Korean restaurant on Geary Boulevard. It was only a "small bite" option but had me wishing for a hotter day and a larger order of the stimulating noodles.
Posted by Gary Soup at 9:10 PM