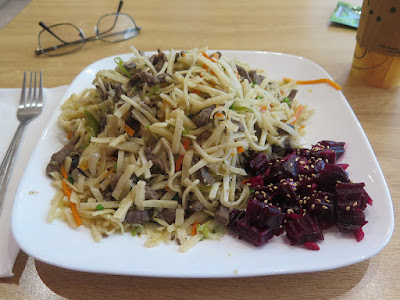 A couple of weeks ago I didn't know that Mongolian food (other than hot pot) existed in San Francisco or within easy transit access.  Then the hyper-resourceful gastromancer with the nom de l'écran "hyperbowler" came up with, first, Asian Grill/Монгол хоол in downtown Oakland a very short walk from the 12th Steet BART station, then Let's Jam, a downtown San Francisco cafe with a split personality, the important half being a Mongolian food cafe. Being a San Francisco first person (take that, Donald Trump) I hit  up Let's Jam for lunch today for my first Mongolian meal in memory. 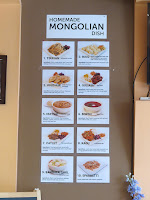 Let's Jam, on the fringe of the Tenderloin on Geary St, began as a run-of-the-mill bagel-and-coffee place run by a couple of Mongolian women who introduced Mongolian classics by stealth, then posted an official Mongolian food menu, complete with pictures, around a year ago. Item #1 on Let's Jam's Mongolian Food Menu is Tsuivan - Mongolian Noodle, a hallmark Mongolian stew of noodles, meat and vegetables. Since it was the only dish on the menu which uses indigenous steamed Mongolian noodles (house-made at that) it was my choice; not that I didn't also hanker for some dumplings, but I'd been forewarned by Yelp reviews of huge portion sizes. My caution was well advised. The order of tsuivan which came my was a veritable mountain of food on a square plate,, with a side (or rather a corner) of pickled beet salad.

According to the research of poster hyperbowler, there are variations among versions of tsuivan, including a version he encountered at the Oakland venue with wok-charred noodles. The version at Let's Jam (described as "home  made pasta, beef, carrot and cabbage mixed seasoned with salt and onion") had noodles that appeared to simply have been steamed and mixed in with the meat and veggies. 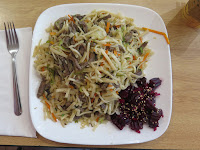 The noodles had been thinly cut, one could almost say julienned, and their size and coarse bland texture were reminiscent of some shredded potato dishes found in Northern China. The well-cooked beef shreds were chewy, as if to emulate mutton, and the vegetable contribution was minimal as, alas, was the seasoning.  I found the blandness of the dish somewhat surprising, but not the portion size. It could easily feed two hungry people for around $11; after eating half or less, I asked for a takeout container and donated the remainder to the street culture of the Tenderloin.

Due to the dish's blandness, I'm not likely to return for the Tsuivan at Let's Jam, but there are dumplings and lamb ribs on the menu with my name on them.