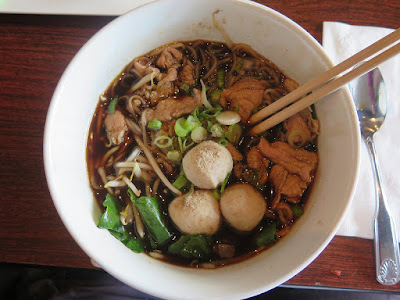 While I was in drydock I made a mental list of new venues to vet when my mobility allowed, and Pak Nam Thai Cuisine in the Tenderloin bubbled up to the top of the list. For one thing, the TL has long been a source of good, inepensive Thai food (e.g. Lers Ros, House of Thai, Zen Yai, Kyu3, etc.); for another, early reports pointed to a decent bowl of Boat Noodles provided by Pak Nam.

Pak Nam Thai Cusine is a cozy boîte ("Maximm Capacity 30") that opened in the former Pagolac space on Larkin St. about two months ago and has been getting consistently good marks on Yelp and the local food discussion boards. It's open 11-4 for lunch and 5-11 PM for dinner, and was nearly empty at 2:45 when I arrived, though two more straggler parties arrived while I was there.  The sole server at the time had difficulties with English, but another woman (a principal, perhaps) emerged to answer the few questions I had.

Pak Nam offers both pork and beef Boat Noodles with a choice of noodle types. The soup is a traditional blood-enhanced broth, though it can be made without blood on request.  I ordered the pork version, with the blood-infused broth and traditional sen lek (thin rice noodles).  I was hoping for a fish cake appetizer, but they were out of it, so I ordered crispy pork belly and was not disappointed by that choice. A good moo krob will make you forget bacon, and this was a good version.

My Boat Noodles came in a deep bowl, which I always appreciate for its ability to keep the soup hot through leisure slurping. The broth was dark and velvety, though a touch sweeter than I'd like. This could have been due to the type or quantity of blood used, as pork blood is reputedly sweeter than beef blood.  The thin rice noodles were cooked just right, and paired well with sprinkling of bean sprouts of identical girth. Onions, garlic and basil were also prominent. Three obligatory meatballs were present, and the remaining pork component was primarily thinly sliced lean loin, as far as I could tell. I noted the absence of pork liver or other offal, and most conspicuously, of pork cracklings, which are to me almost the signature of Boat Noodle soup.

Compared to two other notable Tenderloin Boat Noodle providers, Zen Yai Thai and Kyu3 Noodle and BBQ, I found the both as rich as that of Zen Yai's, though sweeter and less sharp, and less complex than Kyu3's lighter base. In terms of the variety of toppings, it trailed both other versions.

I'm not complaining, though. It was a substantial and satisfying bowl of noodles; try comparing it to what you might find for $8.50 in a ramen joint and you'll find yourself counting your blessing at Pak Nam Thai Cuisine.