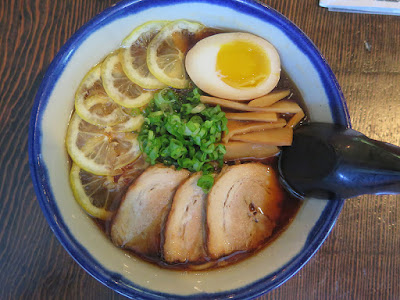 Yes, Virginia, there is a Lemon Chicken Ramen, and I had it today at Kirimachi Ramen. No, it's not soggy chicken kara-age nuggets in a lemon gunk-infused cornstarch broth; in fact there's no chicken flesh in it. What it is, is a chicken stock based, dashi-infused shoyu broth with traditional chasshu (roast pork) as the primary protein topping, along with a half soft-boiled egg, some menma (fermented bamboo shoots) and, notably, six razor-thin lemon slices.

This lemony snippet of ramen culture is the result of a recent visit to Tokyo by Kirimachi Ramen's owner-chef Leonardi Gondoputro and wife Febry Arnold, for the purpose of Febry's participation in the 2016 Tokyo Marathon. Chef Leo and Febry are so passionate about ramen and running, respectively, that their shop's T-shirts are emblazoned with the slogan "26.2 Miles Per Bowl" -- and never has a ramen restaurant had a more fit FOH then does Kirimachi. 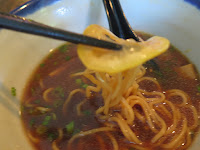 While in Tokyo they discovered the lemon-infused potion at one one of Tokyo's now ramen-yas and Leo reverse-engineered it, with his own touches, on return.  At Kirimachi, the house-made thin, straight noodles rest in a rich, tart chicken and soy sauce broth. The noodles are springy even after resting in the piping-hot broth, which has been made stout enough to stand up to the bold contributions of the lemon slices. As always at Kirimachi, the pork slices and egg half were also perfectly cooked.  Were the lemon slices meant to be eaten? Definitely, according to Chef Leo, who advised that they are best eating with some noodles. I managed to do this even with my non-native chopsticks skills, and found it a novel mouth-feel experience.

The Lemon Chicken Ramen is one of the latest of Kirimachi's constantly rotating (and evolving) specials list, so there's no telling how long it will be available. The citrus-y tartness of this soup enhances its appeal on especially warm days, which today happened to be, and it delivered 26.2 miles of comfort.