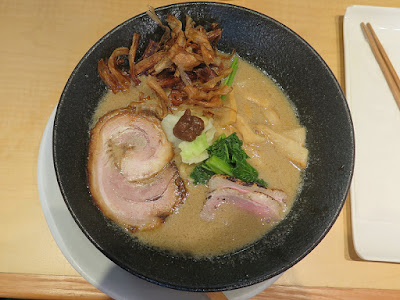 I came across the heraded new Mensho Toko Ramen shop five minutes before the 5:00 PM opening time and affixed myself to the quarter-block long line to see what would happen. When the door opened, the line moved slowly until I was ten feet from the entrance, then stopped dead. Just as I was about to turn tail, a hostess popped out and called for a single diner. I was in like Flynn, given a seat at a counter overooking the kitchen through a curtain of glass drip coffee-makers. 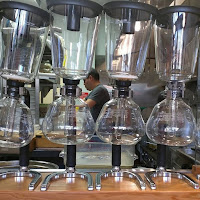 I'm not a chaser of highly-hyped ramen-yas (nor a red-hot ramen fan, as readers of this blog will know) but Mensho Tokyo had a couple of pluses in my book. For one thing, owner Tomoharu Shono seemed genuinely excited to favor San Francsco with his first shop outside Tokyo, personally overseeing its execution, and secondly (and perhaps more importantly) the venue is not pimping tonkotsu broth like ever other new ramen joint in town; in fact, it's not even on the menu here yet. The house special ramen at Mensho's San Francisco branch appears to be tori paitan. Tori paitan, which means "boiling the dickens out of chickens, " according to chef/blogger Keizo Shimamoto, can be seen as a chicken-y cousin to porky tonkotsu broth, the goal of both being to be rich, thick and unctuous.

Tori paitan is the priciest ramen on Mensho Tokyo's menu at $16 (there are other options bracketed around $10) but I decided I owed it to my blog to vet the house special. By default it comes with a single thick slice of chashu (doubling it is an option) as well as a couple of thin slices of duck, a nice touch. The broth was indeed rich and fatty, and could have been cloying, were it not for a couple of well placed accents: a slight pepperiness, and some smoky overtones (which may have come from the tangle of crispy fried shallots).  With these, it was one of the most enjoyable of noodle nectars I have experienced, calories be damned. Speaking of the house-made noodles, they were great, too: curly, thick and springy.  As to the ratio of noodles to broth, it was a noodle-forward bowl, as well as it should be with noodles that nice and broth that intense.

The tori paitan ramen at Mensho Tokyo is the most memorable bowl of ramen I've had since the Hakata kuro ramen at Hide-Chan in New York more than five years ago.  It's a chicken soup that can possibly cure anything from the common cold to my aversion to highly-hyped ramen joints.  I'll be back.