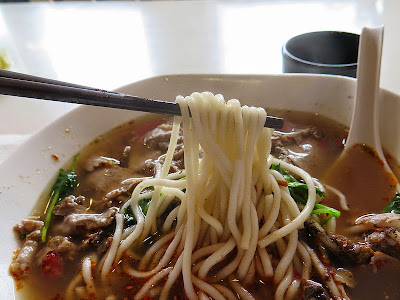 I've dreamt of Guilin Spicy Horsemeat Noodles since I first viewed the 1998 noodle-forward film My Rice Noodle Shop (Guilin Rong Ji).  There has been some positive regulatory movement towards acceptance of horse flesh as  food in the US, but I doubt that the societal barriers to permitting the serving of such a delicacy in the Bay Area will be overcome in my lifetime.  I've been resigned to hoping that a similar dish featuring the meat of a beast that moos instead of whinnying, at the very least, would come along.

Since my last visit, Classic Guilin Rice Noodles, the restaurant that may be Oakland's main reason for existence, has expanded its menu, giving me sufficient reason for making a rare trek across the Bay. Part of the impetus for the trip was a new section on the restaurant's menu, "Special Beef Rice Noodle Series" which includes a dish designated as "Spicy Beef Noodle Soup." This section of the menu, I surmised, would include noodles in soup, as opposed to the restaurant's "Classic" series of dry noodles with broth on the side. 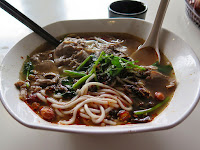 Whether by intuition or wild-ass guess, I was right. My large bowl of Spicy Beef Noodle Soup (which can be ordered "Hot" or "Not Hot," go figure) came with a distinct resemblance to the bowls served in Guilin at restaurants like the one owned by the grandfather of the movie's Rong Rong: slices of horsemeat beef in a spicy broth with round rice noodles of a spaghetti-like girth and minimal vegable toppings that included some pungent cilantro and a scattering of roast peanuts.  The broth was rich and meaty, and nicely spiced (perhaps "Guilin spicy," not Hunan or Sichuan spicy, but the usual chili pot was right there on the table). The meat was firm and slightly chewy (though less gamey than horsemeat would be). If the soup had one weakness it was that I found the noodles a little too soft, but overall (not to be a neigh-sayer) I was treated to a solid, satisfying meal.