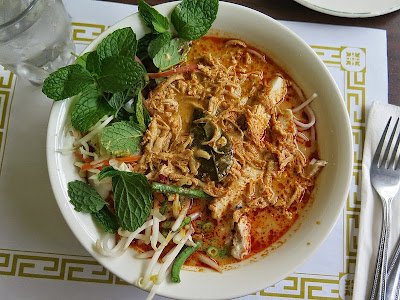 The good news is that Lanxang Kingdom serves an addictive Khao Poun.  The bad news is that I may not see it again for a month of Sundays. Or Thursdays.

As you may recall from an earlier post, Lanxang Kingdom is a once a week restaurant (pop-up is too flimsy a descriptor) that materializes every Thursday at Turtle Tower (that restaurant's regular day off).  In addition to a fixed menu, they rotate other  dishes (including soups) as "weekly specials." That's fine for me, as it increases the variety of delights I get to explore, but it makes repeatability of my experiences problematic. Can one step in the same river twice?

Khao Poun was on this week's list of specialties for Lanxang Kingdom, and wild horses (or elephants) couldn't keep me away. It was my third experience with the dish per se, the other two being at Maneelap Srimongkoun and at the Isan Thai restaurant Tycoon Thai, where it took on the generic alias "Kanom Jeen." I've also had a considerable number of close (and not-so-close) cognates, such as Thai  Khao Soi, Burmese Oh No Kau Swe and even similar-seeming Penang Curry Laksa. 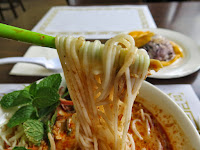 My Lanxang Kingdom khao poun came with perfectly al dente rice noodles (round bun style) in a spicy coconut curry broth chock full of boneless chicken, cabbage and bean sprouts, and chunks of galangal which I chewed on, (something I don't do with ginger) .  It was adorned with banana blossoms, which add at least as much beauty to the dish as flavor.  Overall, it was was similar to the one I had at Maneelap Srimongkoun, but markedly spicier. The spice level was similar to the "kanom jeen" version at Tycoon Thai, but the chicken was not on the bone and it lacked the blood cubes of the Isan version.  The flavor was as complex as it was spicy, and overall it deserves a honored place in the Pantheon of coconut-curry-chicken-noodle soups of Southeast Asia.

With my noodles I ordered another special, Lao-style mango with sticky rice.  The purplish rice was more savory than other versions I've had, and the only sweetness seemed to come from the coconut cream dressing which came on the side to pour over the rice and mango. I usually eschew dessert and sweets in general, but I have a soft spot for mango with sticky rice, and the Lao version at Lanxang Kingdom immediaately became my favorite. 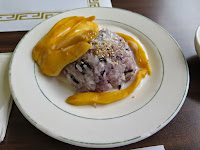 I've blogged about Lanxang Kingdon just once before, when they served Mii Katii on their opening Thursday; this is a noodle blog after all.  But I've been there four times all told, and have been pleased with the the non-noodle dishes as much as with the noodle dishes from their far-ranging menu.  You may not be ready for crickets, larva or  red ant eggs, but you'll find all your familiar Lao favorites there as well, including Lao sausage, rice ball salad and. of course, larb -- plus many flavorful new foods you have yet to discover. Once a week, at least, you'll find the best in Lao food at host Turtle Tower's digs, without having to trek to The Excelsior, Oceanview or the wilds of East Oakland, or having to parse a Lao/Thai menu to figure out which cuisine is which.