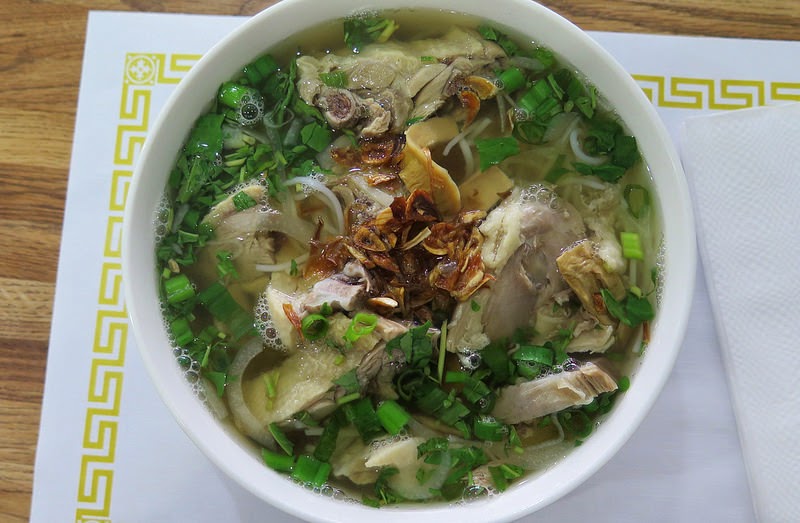 It was the 40th anniversary of the Fall of Saigon (or the unification of Vietnam, depending on where you sit) and I decided to mark the occasion with some Vietnamese noodles. The event that ended the war nobody loved had a salubrious side effect hereabouts: the enriching of the Bay Area's cuisine by an influx of Vietnamese immigrants who brought their food with them. San Francisco may not be San Jose, the city with the largest Vietnamese population outside of Vietnam itself, but our city contains well over 50 sit-down Vietnamese restaurants within its borders, not to mention countless banh mi shops.  The victor in the Vietnam War may have gotten the spoils, but we got the pho.

For my commemoration I chose Tuyet Mai, my favorite Vietnamese mom 'n' pop restaurant and one of the gems of the Tenderloin.  The symbolism was appropriate, too; the owners are from Hue which, though technically part of what was South Vietnam, is very close to the part of Vietnam's narrow waist where the two halves of the Republic were sewn together. For my noodles, I was leaning toward one of the Hue beef soups I have yet to try, but with the weather trending toward  a very toasty 90° F, I decided to go with the lighter bun mang vit, duck with bamboo shoots noodles.

Bun mang vit is listed on Tuyet Mai's menu in the Hue specialties category, but it is easy to see it as popular in any part of Vietnam, and having analogues throughout SE Asia. It could have come from a Hakka or Chaozhou inspiration, and the duck and bamboo shoot combination is a familiar one as far north as Shanghai, albeit with fresh bamboo shoots. 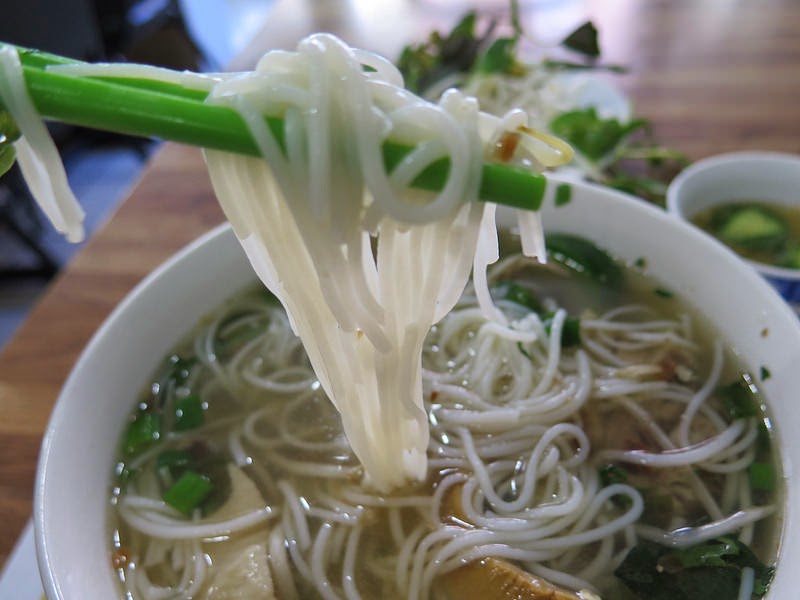 The Tuyet Mai bun mang vit consists of bone-in duck pieces, reconstituted dried bamboo shoots, and round bun ("vermicelli") rice noodles in  a salty, gingery and slightly tart broth. As can be seen in the above photo, there is a generous amount of duck pieces; almost every piece has bone in it, and the meat is not exactly falling off the bone, so it requires you to work for your reward and get two hands greasy.  (It would be nice to have this dish with one of Hai Ky Mi Gia's duck legs!)

There seemed to be a minimal amount of bamboo shoot slices, probably intentionally, as the dried version tends to flavor the broth much more aggressively (and with a different profile) than fresh bamboo. The bun mang vit also came with a little side dish of  Nuoc mam gung, a rather sweet but pungent ginger fish dipping sauce. Tuyet Mai's version had three jalapeno slices floating in it, which eventually found their way into my soup. Topping the soup were crispy fried shallots, onion, garlic, and flavorful Vietnamese greens which I have yet to learn to recognize, but greatly appreciate.

In the end it's duck soup, which you might expect to be a comfort food, but that implies blandness, and Tuyet Mai's broth is far too sharp  to be considered bland. On top of that, the work required to get the meat off the bone will keep you from getting too comfortable there.