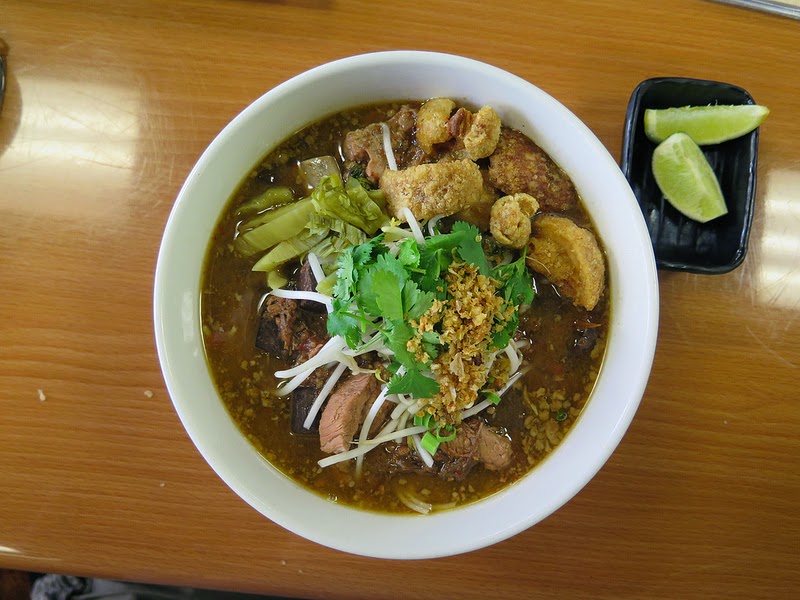 I fully intended to treat myself to some rustic Xinjiang wheat noodles today, and headed for the coming Tenderloin Uyghur restaurant called either Herembeg or Eden, depending on which part of the awning you look at.  A stray reference to "today" in this Chowhound thread gave me the misapprehension that it was already open, but no dice. Or dice-shaped "ding ding" noodles, either. My disappointment was short-lived, however.  Nearby Kyu3 Noodles & BBQ had a treat in store for me.

"We have a special today, not on the menu," announced server Tammy as soon as I sat own. She's already learned that I'm on a noodle hunt when I come there. "Nam ngiao," she announced  "Only Thai people know it, but you might like it."  She tried to describe it, then managed to bring up a picture and a brief description of it on her iPhone. The "ngiao" in the name referred to a flower (from Bombax ceiba, a form of kapok three) that was a key ingredient in the flavor profile, and was not available in the U.S. except when hand-carried from Thailand.  A friend had brought her a small supply, and she used some to make a batch for the day, not bothering to post it on the "specials" board, but advising her Thai clients of its availability.

I did some more research on my Galaxy Tab while my dish was being prepared.  The full name for the dish, whattya know, is khanom jeen nam ngiao. As mentioned on my last post, "khanom jeen" is a generic term for almost any curry-like soup made with fresh or fermented rice noodles, with a wide variation in stocks and ingredients throughout Thailand. The nam ngiao variant is known principally in northern Thailand; Tammy is from Chiang Mai and the chefs are from the North as well, so it figures they'd jump at the chance to bring forth a proper version.

Another characteristic of nam ngiao (and a possible reason for not posting it on the specials board at Kyu3)  is its use of animal blood in two ways: in the broth (like boat noodles) and as congealed blood cubes in the topping. It also makes use of tua nao, fermented soy beans (and another characteristically northern Thai ingredient).  Combining the blood, the fermented soy beans and the fact that the stock is made from long-simmered pork ribs, the result is perhaps the richest broth I've encountered in my noodle adventures; I found it very "beefy" though there is no beef present, and slightly spicy. There was also a pronounced tartness to it from green tomatoes, and lime wedges were served on the side to increase the tartness if desired.  Lurking in its depths was pork rib meat (some still on the bone) and a profusion of pork rinds topped the broth, along with cilantro, green tomato, and bean sprouts. It's not clear what the ngiao blossom contributed; I found one blossom and ate it carefully, but it tasted of the soup as a whole at that point.

Tammy said they had enough ngiao blossoms left for another batch of nam ngiao, and promised to post an announcement on Kyu3's Facebook page when she did -- I made her swear to it.