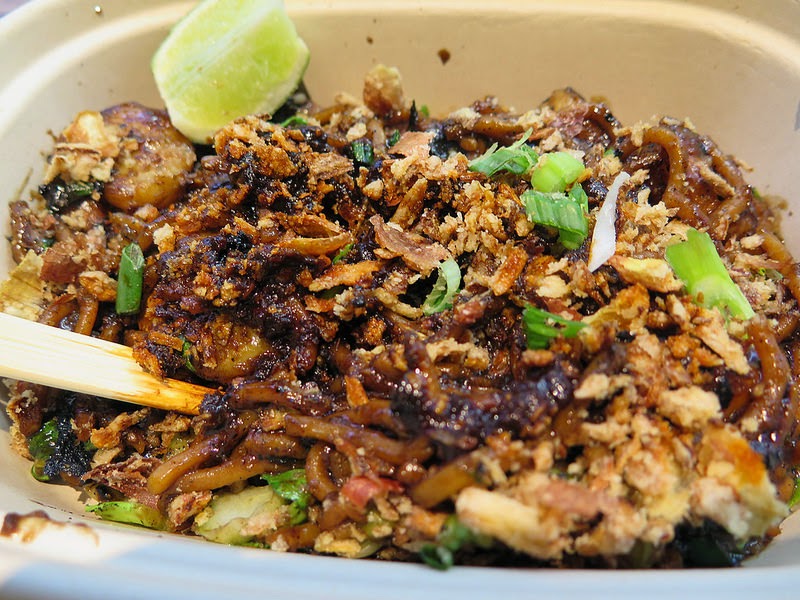 The name hokkien mee, for a popular Singapore/Malaysian noodle dish, is probably as familiar to me as my own name (though granted, at my age, that might not mean a lot). Yet, I had never ordered or to the best of my knowledge eaten, a dish by that name.  Therefore, when I decided to make Azalina's hokkien mee the the object of my second visit to her new permanent location in the Twitter Building, I did a little research.

A little knowledge is a dangerous thing.

Azalina is from Penang, Malaysia and all of her cooking is informed by Penang, so when I read Wikipedia's neat pigeonholing of hokkien mee into three categories (Penang prawn mee, Singapore pran mee, and Kuala Lumpur char mee, I expected a soupy dish with both rice and wheat noodles, no soy sauce in the broth, and featuring prawns.  They were right about the prawns.

What came to me was a dish of dark, smoky beauty. It was definitely stir-fried, and featured  a small army of wok-charred, tail-on prawns and Azalina's house made turmeric noodles. They were bathed in a soy- and sambal-based dark sauce. I believe the chalked menu board said something about a house special "XO" sauce, but that would be to demean it; the tawny spicy and savory nectar of the soy sauce and chili gods had me licking the biodegradable cardboard bowl when I finished the noodles. I couldn't begin to identify the veggie components (was never good at that anyway) nor the other crisped-up proteins and carbs in the noodles, so well did they all merge into a symphony of textures and flavors.

A commentator on Azalina's Facebook page suggested the the dish was more like a mee goreng (another Malaysian fried noodle dish), and she replied that her dish might not be familiar to him on account of the Mamak influences.  But what does Azalina know?  She's only the fifth generation of Mamak street vendors to offer hokkien mee. If it's hokkien mee to Azalina, it's hokkien mee to me.