A Bloody Good Kao Piak At Tycoon Thai, Mason Jars Or Not 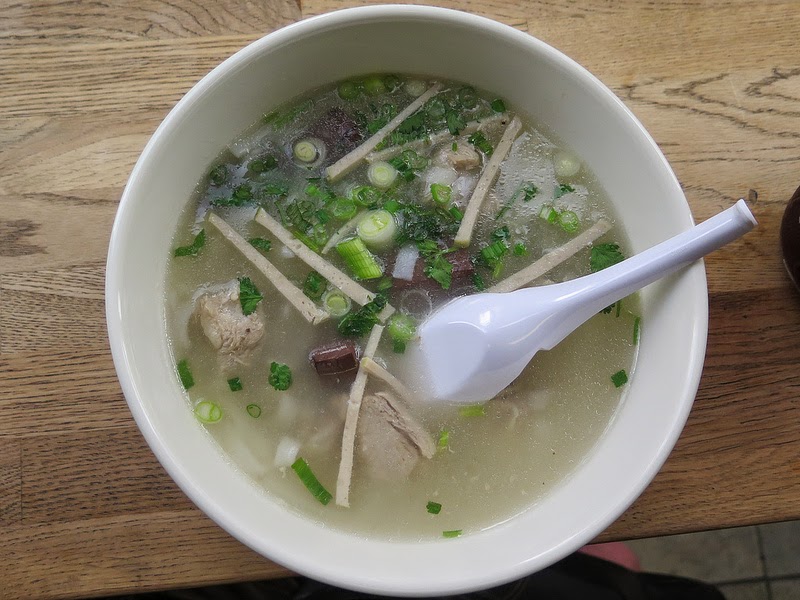 What is it with Asian restaurants and Mason jars? One would think an Asian restaurant in San Francisco that served all its drinks (including local craft beer) in hipster fetishist Mason jars would be serving dumbed-down, er, "gateway" Asian food. If I'd bet on that assumption, I'd be 0-for-2 by now.  First came O'Mai Cafe at the trendier end of Clement, where my Vietnamese iced coffee was served in a Mason jar alongside my anatomically correct bun bo Hue.  An now comes Tycoon Thai, in the Tenderloin, no less.... 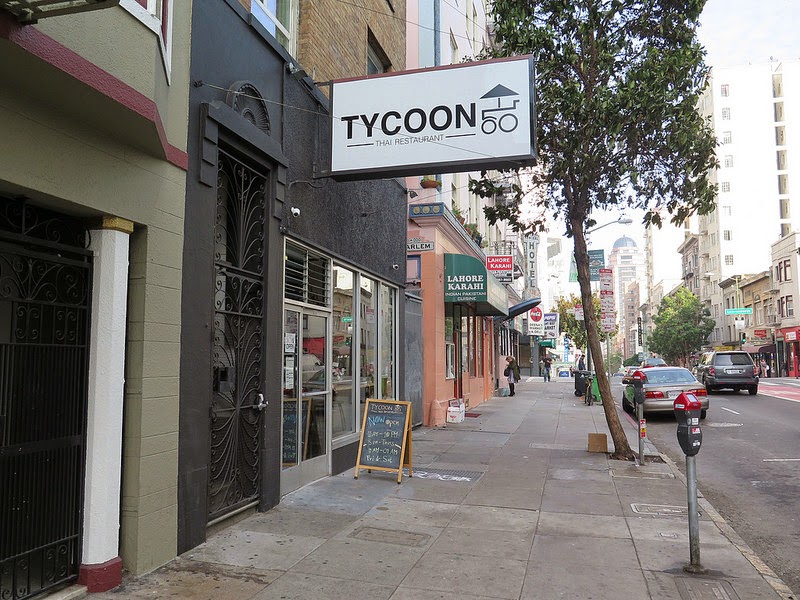 Tycoon Thai is a recently opened Thai restaurant (I'd call it Thai/Lao) that opened in the former Pop-up Cafe space.  Among the Lao and Isan Thai dishes listed on its menu is Kao Piak (also known as Kao Piak Sien), the chicken noodle dish considered to be Laos' national dish. Since Lao food has historically been scarce in San Francisco compared with other Asian cuisines, I was pleased to be offered the chance to experience a third version of the dish I'd previously sampled at Champa Garden (SF) and Maneelap Srimangkoun.

Tycoon Thai is all tall tables and bar stools, and on arrival I perched at a window counter to watch O'Farrell St. life go by. After being brought my menu and a glass of water (startlingly served in a Mason jar) I ordered the kao piak along with a cha ma now (Thai lime iced tea), which also was to come in a Mason jar. I normally would have added an appetizer, but at Tycoon Thai they all seem priced and sized for sharing, not for solo diners, so the sai ua and the som tum Lao will have to wait for further visits. 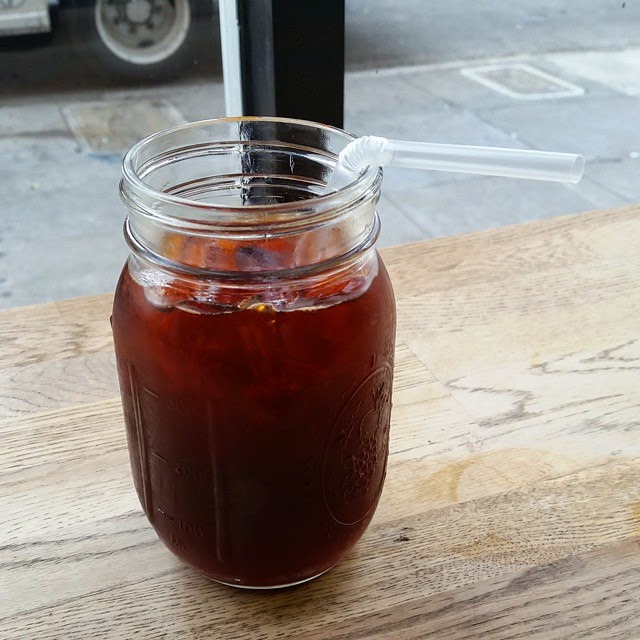 The kao piak on Tycoon Thai's menu is described as "homemade rice flour noodle" with "rice flour, chicken. (optional pork blood), topped with green onion and fried garlic." It's also tagged as "Laos' signature). It was the pork blood option that excited me, not that congealed pig's blood cubes have much to offer other than color and texture, but it seemed an offer of another degree of authenticity, as neither of the two versions I had previously had the option.  So how did Tycoon Thai's version of Kao Piak stack up against Champa Garden's and Maneelap Srimongkoun's?

Overall, Tycoon Thai's version was quite similar to Maneelap Srimongkoun's version. Though the latter did not have or offer pig's blood, both versions came with chicken on the bone, and wide, flat rice noodles.  Champa Garden's version had neither pork blood nor bones in the chicken, and came with round, not flat, rice noodles (all three venues promised house-made noodles). The broth at Tycoon seemed a bit saltier and deeper in flavor, and definitely had a bit more of a cilantro kick than Maneelap's. If there was one fault to be found with Tycoon Thai's kao piak, it was that they seemed to skimp on the noodles, and I didn't see a kaedama option on the menu. I could have eaten a lot more, and if TT covers that, it will clearly have my favorite version among the three (bearing in mind here that kao piak itself will never be my favorite noodle dish, except possibly when I have the flu, due to its grandmotherly chicken soupiness). 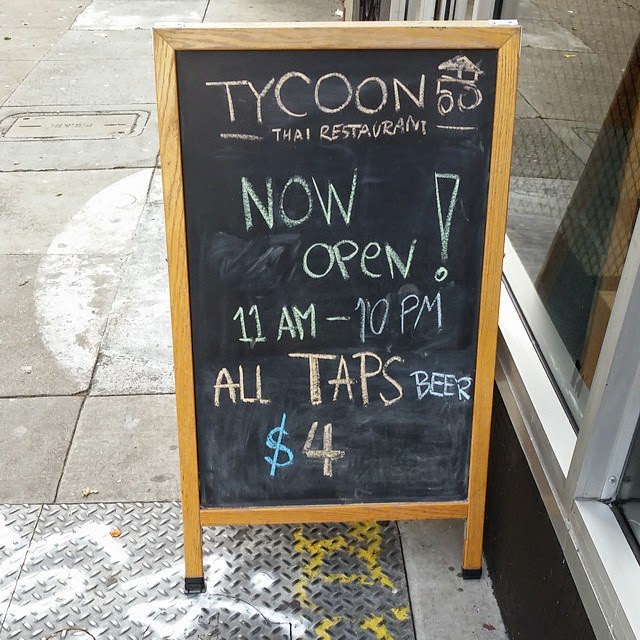 Tycoon Thai offers both Thai and Lao versions of one of my favorite non-noodle (but noodle-ish) dishes, green papays salad. The som tum Lao version is tagged with "Caution: This version is very hot, fishy, not sweet. (additional vermicelli noodles for $2)." The restaurant also now has its beer and wine license, and offers $4 pints on all taps. I'll be back soon to see if Tycoon Thai's som tum Lao can really walk the walk, with a Mason jar full of Lagunitas in my hand to quench the fire if it does.