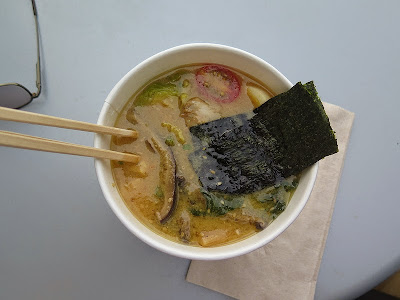 Doing ramen seems to be an obsession with chefs these days, regardless of how many other things they have on their plates. Or in their bowls. Generally these efforts are accompanied by advance social media buzz (which seems to be go hand in hand with ramen). As a result, it came as something of s surprise to me and apparently food media people when the otherwise undistinguished coffee and pastry bar Seismic Joint, attached to the Exploratorium, began offering ramen created by a legendary sushi chef who once presided over what the San Francisco Chronicle considered to be San Francisco's best sushi spot.

The chef in question, Sachio Kojima, once of Kabuto, currently serves up sashimi at Seaglass, the high-end cafeteria-style restaurant attached to The Exploratorium at the business end of Pier 15. Recently, and without fanfare, he added ramen to his repertoire, served at "Sachio's Ramen Shop" within Seismic Joint, at the Embarcadero end of Pier 15, next to the Exploratorium gift shop and just a few steps from the sidewalk. On offer are four different broths (shoyu, miso, Sea Salt, and a cod sour broth) either vegetarian for $8.50 or with chashu for a dollar more. Curry ramen is also available according to the chalkboard menu. 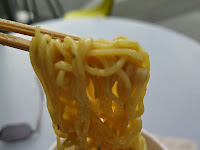 Seismic Joint is primarily a takeout joint with little seating (there are three tables outside) so the ramen is served in disposable containers.  I carried my order of miso ramen with chashu gingerly to one of the tables (all were available at 2:15 today). The thick and not overly salty miso broth was comforting, and chock full of curly medium noodles on the harder side of al dente, but not objectionably so. The two slices of chashu were savory but overly soft, having spent too long in their warming place (ramen service is from 11:00 to 3:00, and here it was almost 2:30). They did have a nice fringe of fat on them.  There was also the obligatory nori "flag", half a boiled egg, shiitake mushrooms, bamboo shooots, onions, cherry tomato and green beans.

By its nature, Sachio's Ramen Shop could not be considered a destination, but certainly would always be in play for lunch if I worked in the area, and may well be graced by my presence again if I am wandering by and hungry. 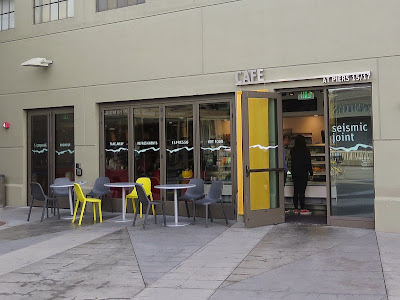