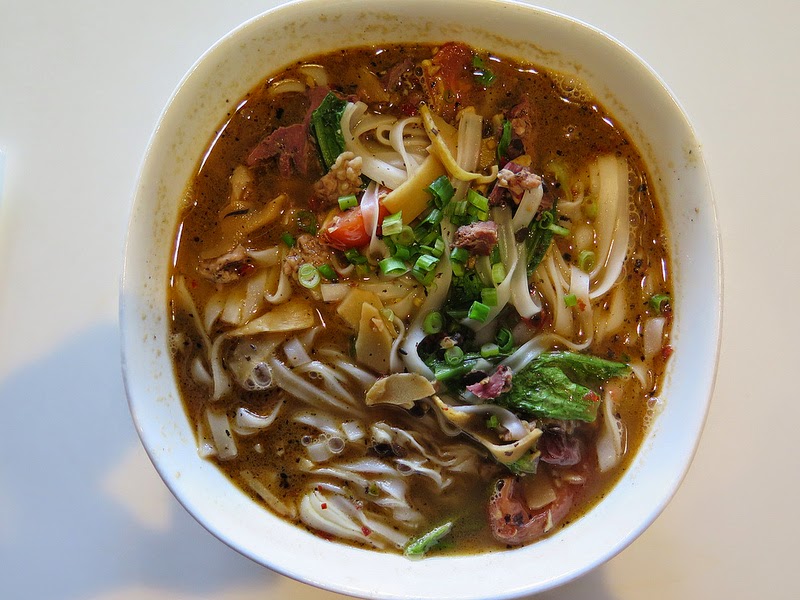 A recent tip from a Chowhound.com poster that a dish called lao you fen was now being featured  at Classic Guilin Rice Noodles in Oakland, where I had previously enjoyed the namesake rice noodles and Liuzhou spicy snail noodles furnished me with a mandate to return to the Mysterious East Bay.

Lao You Fen (老友粉), literally "Old Friend Rice Noodles" is synonymous with Nanning, capital of Guangxi Province.  Here's how it's described on one Chinese travel website:

"Lao You Fen is the most famous Fen dish and has over 100 years of history. Legend has it that an old man went to Zhou Ji Teahouse everyday and made friends with the Boss Zhou. One day he was not able to go because of a cold. Boss Zhou made a bowl of hot Fen especially for his old friend. That Fen dish had so many flavors including garlic, fermented bean, pepper, beef and sour bamboo shoots that it helped the old man recover quickly. From then on, Lao You Fen became popular for its multi-flavors and cold-busting abilities."


Classic Guilin Rice Noodles was packed at 1:15 on a Friday when I arrived, making for a brief wait for a table, but began clearing out quite rapidly around 1:30. The menu had been expanded quite a bit since my last visit, particularly with new lunch combos, and I was handed a stack of separately laminated sheets (including one for the lao you fen) along with the original main menu. The "old friend noodles" are available in a "small" or large bowl, and I wisely chose the small one, which is actually quite large. There's also a choice of beef, pork, or both. I chose both. 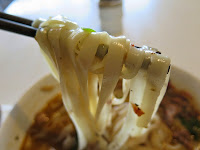 My bowl arrived about 10 minutes after ordering, the broth piping hot. It was a deep rich broth, markedly sour and spicy. Research indicates that lao you fen broth typically includes lobster sauce, but I can't confirm its presence in this instance. Fermented black bean was also an obvious contribution. The tartness of the broth comes unequivocally from sour bamboo shoots (an essential ingredient), and the spiciness appeared to come from both chili and black pepper. There was a decently high level of spice heat, enough to clear the sinuses. Also included was garlic, tomato, scallion tops, pickled green beans, and of course, beef and pork, some of which appeared to be chewy offal I didn't immediately recognize. The noodles themselves were up to the heavy lifting required to support the bold, sharp "multi-flavors" of the broth and toppings. Wide and thick enough to provide a good chew, they almost rivaled fresh wheat noodles.

Classic Guilin Rice Noodles is a gem of an operation, one I wish I could transport to my side of the Bay. As it is, I'm not going to wait for it to introduce another landmark Guangxi specialty to return.