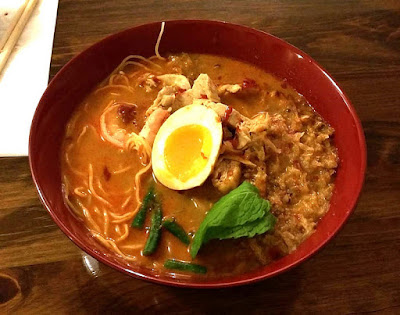 My last two posts were reports on pop-ups (by Nyum Bai), so for a change of pace, here is a report on a pop-in by EatWithTracy in the Outer Sunset District. What I'm calling a pop-in here is what Hong Kongers like to call "private kitchens;" it is not a restaurant that occasionally pops up in unexpected places, it is a fixed location (usually a residence) where a talented chef hosts meals on a regular or irregular basis. You, the eater, can "pop in."

"EatWithTracy" is hosted by Malaysian expat Tracy G who painstakingly taught herself to cook the food she grew up with after moving away from Kuala Lumpur (presumably because the alternative was much worse). There's nothing surreptitious or clandestine about her "pop-in." You don't need a sponsor or say "Joe sent me" to get in; just make a reservation via the Feastly website. 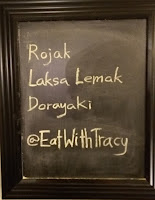 I found my way to Tracy's Sunset District apartment for the "Laksa: Spicy Malaysian Noodle Soup" prix fixe 3-course meal consisting of Rojak, Laksa Lemak, and (a very un-Malaysian) Dorayaki for dessert. Tracy is obviously as knowledgeable as she is passionate about Malaysian food, and was as articulate in expounding on the meal she was serving as she was skilled in preparing it. Laksa Lemak (also known as Nyonya Laksa,  according to Wikipedia) is one of six Malaysian laksas she is accomplished in preparing, Tracy explained. "Lemak" signifies a rich coconut gravy.  Although the broth in laksa lemak is quite spicy, there is no curry in it, she said, so it is not called a "curry laksa." (Since "curry" is typically defined as a mixture of spices which may or may not include curry leaves, this may be a distinction without a difference.)

I really enjoyed the rich, spicy broth of Tracy's laksa (which I augmented a bit with the fresh chili sauce provided).  I was not too fond of the ultra- fine ("dragon beard") rice noodles used in her version, though that is a reflection on my personal preferences, not on her judgment or skill. As with the fine wheat noodles beloved in Hong Kong, I was left with the feeling I was chewing on someone's hair. Overall, though, it was a very hearty and satisfying bowl of noodles. (It's a meal, Bania!)  I look forward to trying her other versions of laksa, hopefully with more robust noodles. I also enjoyed he rojak very much, and it might not even take the promise of noodles to bring me back next time.

Where slurped: Somewhere in the Outer Sunset (see eatfeastly.com)