Whack-A-Mole: Nyum Bai Pops Up Again, And I Hit It For The Cambodian Chicken Noodle Soup 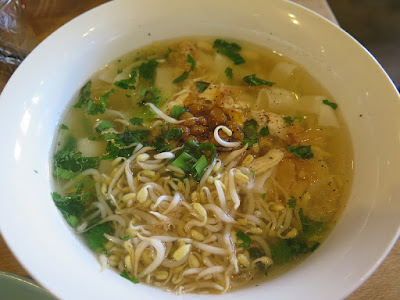 A mere eight days after I had a chance to enjoy Nyum Bai's Cambodian fare at its Mission Pie debut, it popped up again, like a pesky mole in a whack-a-mole game, three blocks down the road at Wise Son's Deli.  My noodle hammer was at the ready, this time to hit  on the chicken noodle soup called Banh Ghan on the menu.

I have to admit I'm winging it here with my post portem on this chicken soup experience; I didn't get a chance to pick Nyum Bai owner Nite Yun's brain about the origins of this dish, and Googling "Banh Ghan" yields practically nothing with the same or similar spelling related to Cambodian food.  My sole "hit," interestingly enough, was for a dish at a fascinating diner-like restaurant in Stockton CA (where MS. Yun grew up) called  Lucky Star Grill. This place, which now tops my list should I ever hit Fat City again, serves a dish called "Thick noodle banh ghan" along with other Cambodian and Vietnamese- and Thai-tinged dishes (plus Mongolian beef, for good measure). My best guess is that "banh ghan" is related to the Vietnamese term banh canh, which denotes  a wide, thick rice noodle (which may or may not include tapioca flour) and can refer to a wide variety of soups using such noodles. 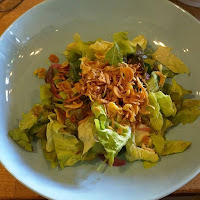 I've learned that there is a whole panoply of Southeast Asian chicken noodle soups using wide rice noodles, some with curry and/or coconut, some without. Nyum Bai's banh ghan has neither. It was described on the pop-up's menu as "homemade chicken broth, wide rice noodles, poached chicken, crispy garlic, cilantro, salted soy beans," with a footnote advising the use of shellfish in the broth.

With its lack of curry and the heft of its rice noodles, I found the banh ghan stylistically most similar to Lao khao piak sien, though comparisons could also be with North Vietnamese pho ga, which uses flat, though less substantial rice noodles. Compared to the Lao version, Nyum Bai's soup came with a less fatty richness and more vegetal complexity to the broth's flavor profile. (One could say a it's "healthier" taste, but what can be unhealthy about any chicken noodle soup?)

As I've noted elsewhere about khao pian sien, Nyum Bai's banh ghan relies primarily on the soul of chicken soup for its appeal.  It's pure comfort, and almost as familiar and un-exotic as something your Caucasian grandmother (if you have one) night make. Feels right in a Jewish deli, too.

With my soup I had a texture-rich Camodian tamarind salad, which was as tasty as it was photogenic.