To Suka For Soto Ayam, And Happy I Am With New SE Asia Noodle Options 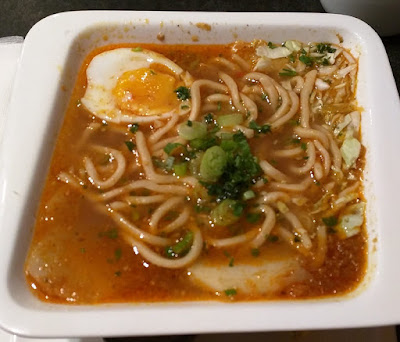 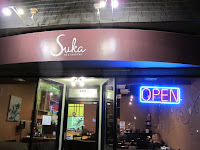 Suka has been open less than two weeks and its menu is still a work in progress (as is the execution of some of its offerings) but there's a core of Indonesian and Indonesian-inspired  dishes on its slight menu including six mains, three salads and two soups. These are bracketed with eclectic appetizers such as yucca fries, wings and satays, and a selection of Western mains for your friends with xenophobic palates, including chicken parmigiana and grilled salmon. Don't lower you expectations for these; the dinner chef comes from Sotto Mare in North Beach. There's also an entirely separate Western-style breakfast/brunch menu, served on weekends only.

The two Indonesian soups on Suka's menu are Soto Ayam and Bakso (listed as Meat Ball Soup on the menu). Soto Ayam, my choice for the meal (accompanied by chicken satay for additional protein) is Indonesia's star in the constellation of SE Asan chicken soups. It features a turmeric-laced spicy yellow broth (sans curry or coconut), noodles, half a boiled egg,  and chicken.  Other than (or in addition to) noodles, it may also include flat rice cakes or dumplings. 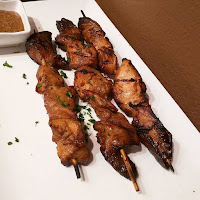 According to Suka's owner, the melodiously named Yenny Yulianny, the traditional noodles used in this dish are "silver" noodles (i.e. bean thread noodles) but she has been using rice noodles or wheat noodles to test reactions. Any of the three types will be used on request, however. She also admitted to dialing back on the spiciness (a shame, because there are no pots of chili paste on the tables). Next time I'll request it spicier, and with the tradtional noodle type. What I was left with was a rich, well-seasoned and comforting broth (it's chicken soup, after all), with noodles that were appropriately dense and hearty chunks of chicken lurking beneath. Portion size was small, but it's priced as an appetizer ($7.95) not as a main, and combining it with the three skewers of chcken satay made for a very filling meal.