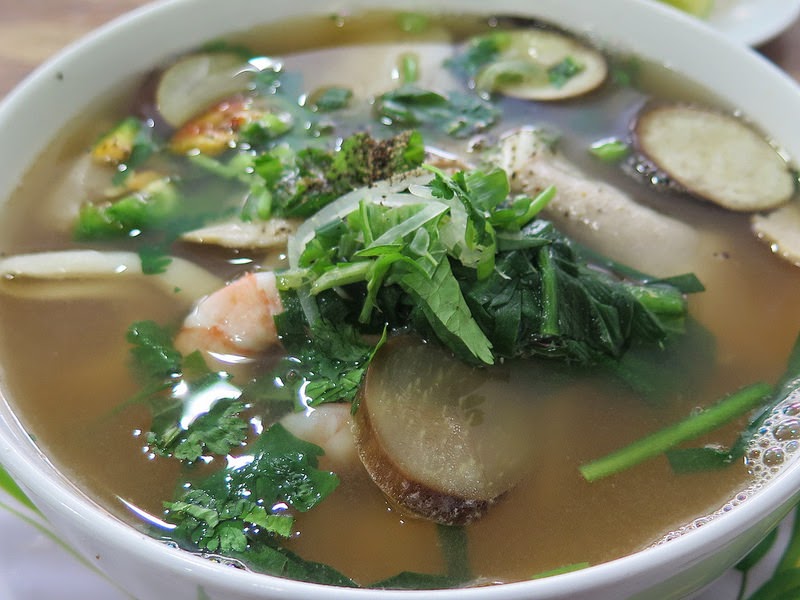 On my visit documented below to newly gussied-up Tuyết Mai (nee Ngoc Mai) to reaffirm the excellence of its bun bu Hue, I noticed bún mắm on the menu.  A little research confirmed that it had been there all along. This came as a surprise for me, as I had labored under the mistaken impression that the shoebox-sized Mong Thu, three blocks down the street, was the only place in town that served this delicacy. This discovery was excuse enough (as if I needed one) to return to Tuyết Mai a mere five days after my previous visit.

I ordered a "small" bun mam.  Although Tuyết Mai's menu only lists a single price for its bowl of soups (the "small" size), a large size is also available. The  smaller bowl is plenty for lunch, even for Generation XL types like me.

Bun mam is akin to a gumbo or a chowder; the broth is flavored with fermented fish paste (its tare, so to speak, to use a ramen analogy).  Its toppings are primarily seafood, with the addition of pork of one form or another.  The overall flavor profile is sour, spicy and fishy, in a positive way. 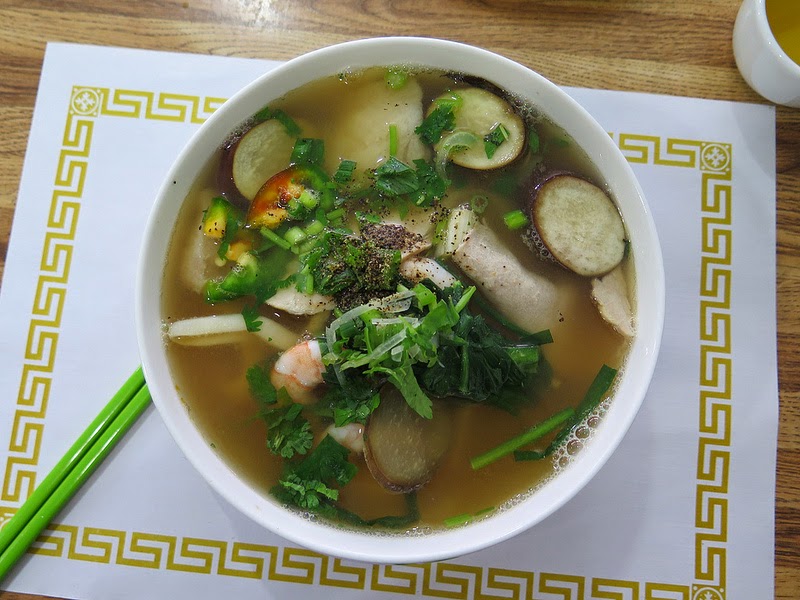 Tuyết Mai's bun mam came with a broth that seemed a bit less fishy than Mong Thu's but with more tartness and spiciness; in short, balanced in a way that seemed more multi-dimensional -- the three slices of jalapeno and the squirt of lime I added from the obligatory condiment dish were all but superfluous.  I was especially surprised (and pleased) by the degree of peppery heat; it was nearly as spicy as the house bun bo Hue. Toppings included prawns, octopus, fish (possibly catfish), thin slices of pork pate and sliced eggplant. The robust rice noodles were not mushy, as had been Mong Thu's. In sum, it was a bpwl of noodles that was both comforting and exhilirating, and one I'll gladly repeat.

The word is that Mama Tuyết's "retirement" will include her hanging around the kitchen for another three years, as she was today and on my last visit.  Bún mắm. thank you ma'am!