Noodle Break At Aruba, Island Of Taiwanese Street Food In An Ocean Of Boba Joints 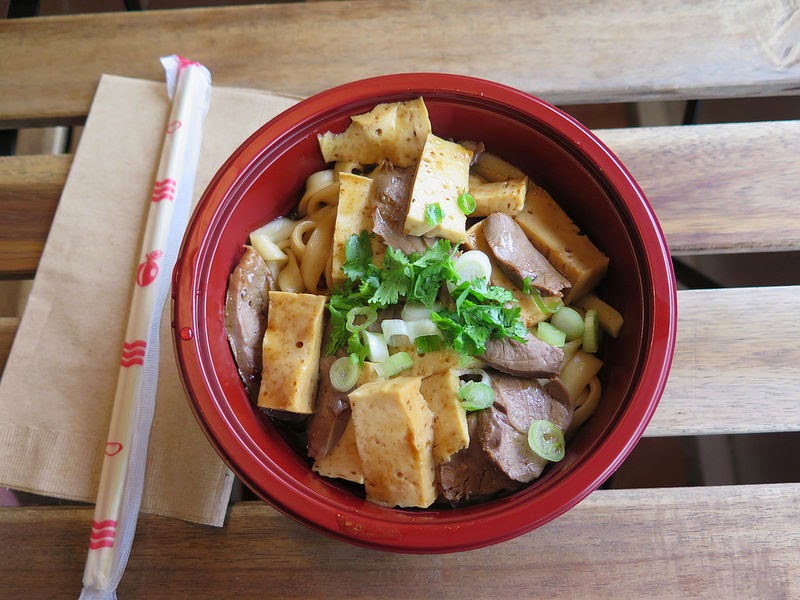 There's a stretch of Irving Street from 19th to 24th or 25th Avenue I like to call "Boba Central" because it has the greatest concentration of Bubble Tea, Fruit Smoothie, and Pan-Asian snack shops in the City. The new kid on the block is a hole-in-the-wall (to put it generously) curiously named Aruba (阿滷吧). It emerged, a couple of weeks ago, literally sandwiched between the two Teaway outlets between 22nd and 23rd Avenues.

Aruba is not named for an island in the Netherland Antilles. According to a Taiwanese woman of my acquaintance, "Aruba" is a wordplay on some off-color slang young people will catch onto. I don't know her well enough to have asked for specifics, but a little research tells me it's probably 阿魯巴, which you can read about here. The 滷 substitution in the snack shop's name appears to be a reference to 台式鹵味, "Taiwanese Marinated Food," a specialty of the house, according to  a sandwich board sign in front.

This "Taiwanese Marinated Food" refers to a long roster of offal-centric meats, veggies, and tofu, any number of which will be cooked in a five-spice flavored soy sauce "gravy" on request and served, garnished,  in a cup as walkin'-around food. Aruba's grand opening promotion is two items for $3.00 and, I believe, $1.50 for each additional item. 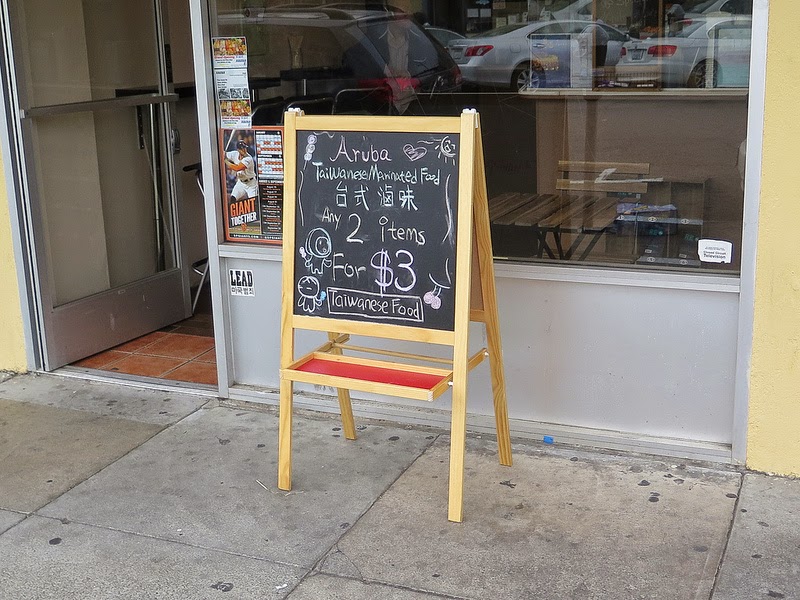 Aruba also has a specials board and, luckily for me, today had udon and knife-cut noodles available as a base for the marinated goodies for an additional $2.00. Also luckily for me, one of its two tables was available to me for a sit-down meal.   I went for the knife-cut noodles with chicken hearts and "QQ Tofu" as toppings. I didn't ask about the provenance of the noodles; they obviously weren't made to order in that small space, and possibly not even in-house, but the "knife-cut" designation assured me that someone had made them by hand, at least. My faith in that was justified, when they came, strong, a bit wabe and properly chewy.  The chicken hearts were thinly sliced, making them easy to chew.  The firm tofu was, as the "QQ" suggests, also pleasantly chewy. The soy sauce"marinade" (broth, in this context) was familiarly 5-spicey and slightly sweet, and benefited from a few squirts from the nearby sriracha bottle.

My bowl of noodles was not large and not really a destination bowl of noodles, but for $5 was a solid and tasty mid-afternoon snack which I will not hesitate to drop in and repeat (trying different toppings), assuming they continue to make the noodles available.

I haven't seen a unified menu, and am not sure what their other regular offerings or specials will be but based on Aruba's Facebook page and Yelp reviews, pork rice plates and skewers have been available. Aruba is worth keeping an eye on.