In my dreams David Shih brings a branch of Xi'an Famous Foods to San Francisco and plunks it down in my neighborhood.  The noodle gods aren't so generous, but they've taken to throwing some Silk Road bouquets my way. A little more than six months ago, San Dong House on Geary Blvd. acquired a chef from Xi'an and repurposed itself as "Xi An Gourmet," bringing creditable versions of some Xi'an specialties to their menu. A couple of months later, the awkwardly named "House of Xian [sic] Dumpling" came to my neighborhood bringing handmade noodles and dumplings, but only a short list of characteristic Xi'an specialties.

Last week Terra Corra Warrior swelled the ranks of restaurants in San Francisco promising Xi'an/Shaanxi food to three in number when it opened without fanfare in the space that used to be Kama Izakaya on Judah Street and 31st Avenue. I visited Terra Cotta Warrior today, and based on my first impressions, it may be the best option for experiencing the food from that region in SF yet.

As its name implies, Terra Cotta Warrior was conceived top down as a showcase for Shaanxi Cuisine (the city of Xi'an, in Shaanxi province is, of course, home to the famed Terra Cotta Warrior army). It's menu is compact and focused, with nearly ever dish characteristic of Shaanxi or a neighboring province. It's a noodle-centric cuisine, and as befits a restaurant of this type, noodles are hand-made in house. Included are crowd-pleasing roujiamo ("Chinese burgers") in pork, lamb and pork wiih chili versions, pao mao dishes (featuring broken flatbread in place of noodles) and a variety of intriguing cold and hot dishes and side dishes. (There's no Lamb Face Salad, to be sure; the version served at Xi'an Famous Foods in New York wouldn't be legal in California in any event, according to Chris Cosentino.)

I ordered my favorite benchmark pair of Xi'an specialties, you po che mian ("Noodles with sizzling oil" on the menu) and a cumin lamb roujiamo ("burger").  The roujiamo lamb filling was more intensely cumin-y but less peppery than the version at Xi An Gourmet, and there was less of it; however, the burger was a buck-and-a-half cheaper at Terra Cotta, and just about the right size for a side bite to a big bowl of noodles.  The flatbread "bun" was softer than Xi An Gourmet's, and did a better job of absorbing the juices from the filling. 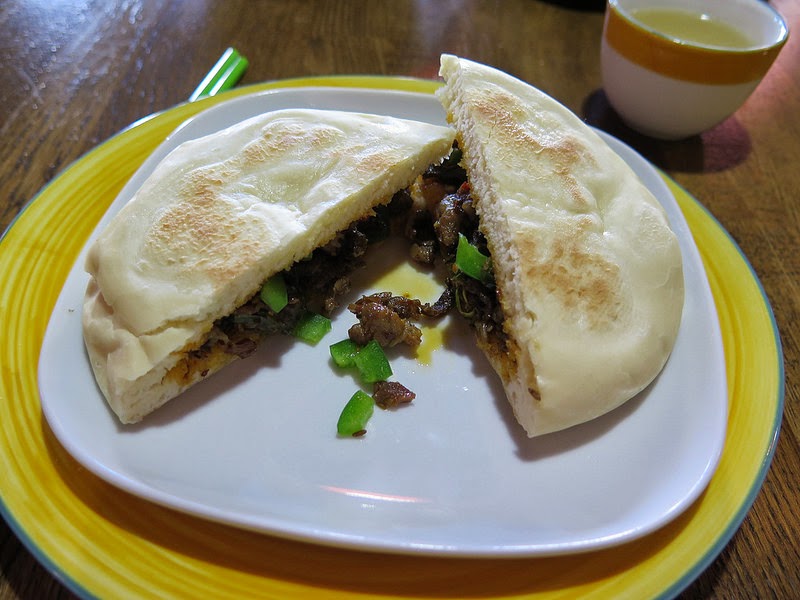 My bowl of you po che mian was a real winner. It's a dish where sizzling hot oil-based spicy sauce is poured over robust freshly made, freshly cooked wheat noodles (which must also be stirred or tossed before eating). Although the name implies the use of wide, hand-torn ("che" meaning "torn") noodles, it actually came with fat, round hand-pulled noodles, as is sometimes the casse with this dish. (According to proprietor/host David Deng, the flat "biang biang" style noodles will be used on request.)  The shape of the noodles in this dish doesn't matter, as long as they are robust and chewy, as mine were. Either way you get a rewarding, if different mouthfeel.  The chili sauce "bath" the noodles get is from a secret (natch) recipe and is wondrously complex and bracingly spicy. If you have a tolerance for heat at all, you'll want to drink the dregs, as I did.  I'd rank the you po che mian at Terra Cotta Warrior as good as any I've had in China (or New York, Joe Di; I'll report on the liang pi later).

I brought home a copy of the menu and am making a bucket list for many repeat visits. Perhaps Terra Cotta Warrior will make me forget Xi'an Famous Foods once and for all.