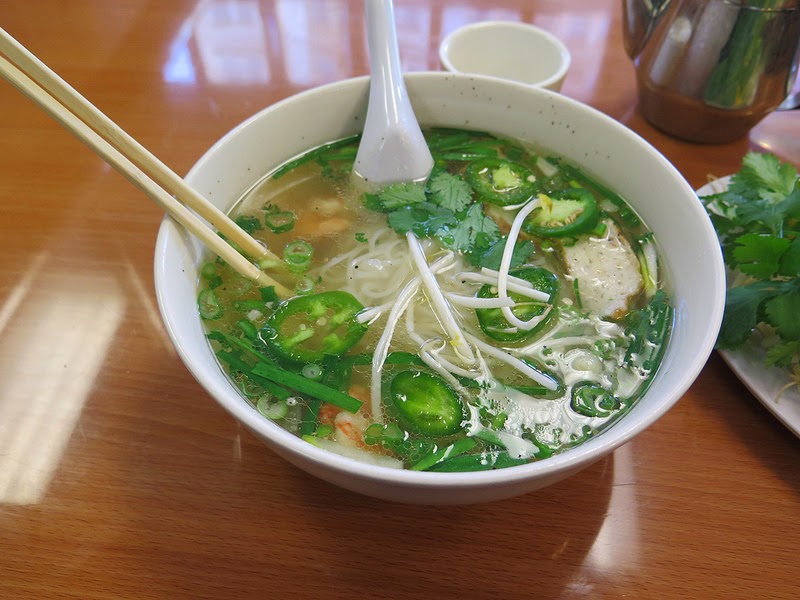 Friday morning sent me to the TL to vet the Bun Bo Hue at Ha Nam Ninh, which is only offered on Fridays and has reached legendary status. I was hankering for some good BBH since the lamentable closure of Ngoc Mai and got there early (for me), at 12:15 with high hopes. Alas, it was already sold out, and it didn't take me long to improvise a Plan B.

Ha Nam Ninh's everyday landmark dish is Hu Tieu Nam Vang, especially the "dry" version (broth on the side), which is as elegant in appearance as it is tasty. I've always wondered, though, if the dry version, local foodie fetish that it is, was really the preferred version. Vietnamese food authority Andrea Nguyen, in her Viet World Kitchen blog, says she's seen a dry version of hu tieu but never tried it. Why not order it in soup? 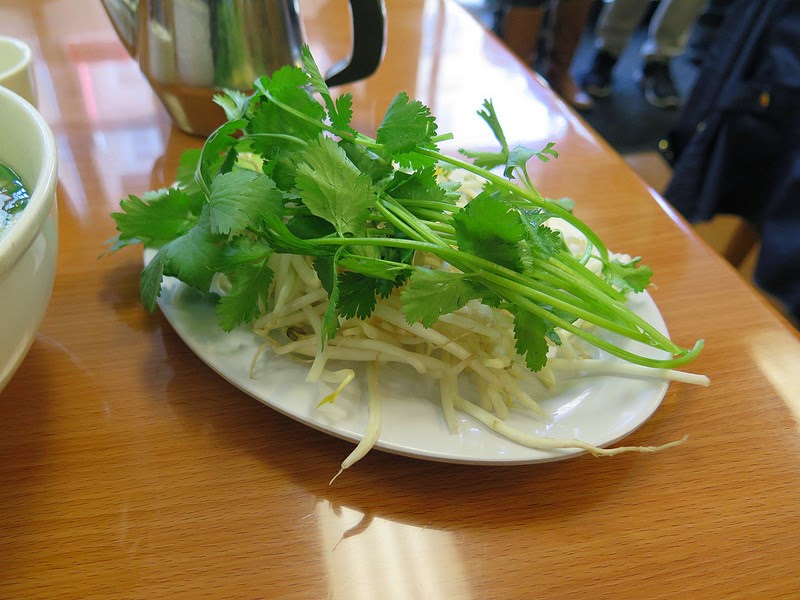 When my hu tieu Nam Vang in soup arrived, it deceptively resembled pho ga, presenting a face of a pale broth with bright green islets, the proteins lurking below the surface. (The photo above was after I had added garnish and stirred it.)  A taste of the broth revealed otherwise, though.  It was a very round, slightly sweet southern style broth with a touch of heat even before I added jalapeno slices (the bottom of the bowl, which yes, I always see, revealed some black pepper). I checked off the proteins, which seemed to be the same in amount and number as in the dry version I'd previously enjoyed: shrimp, fish cake, slices of pork, ground pork chicken and some unadvertised cuttlefish.  The broth seemed fuller than supplied on the side with the dry version of HTNV, but that may be because the protein ingredients had already been bathing in it and the fish sauce accounted for.  The shrimp and other ingredients seemed as fresh as in the dry version, as near as could be determined, so fully infused with broth.

In one significant aspect, the "in soup" version of hu tieu Nam Vang trumps the "dry" version: slurpability.  There was no need for decorum, I wasn't in Des Moines. I hunched over the bowl and sucked down the noodles, slurping like a pro. And when there was nothing left but the dregs of broth, I picked up the bowl and drank it down.

And that, my friend, is whay I love noodles. And why I'll return to Ha Nam Ninh.