Fishing For The Other Laksa: Penang Asam Laksa At Penang Garden 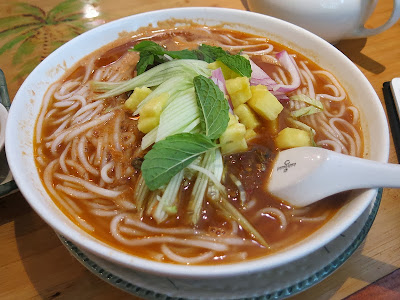 If you are a lover of Asian cuisines, you are no doubt familiar with the spicy, coconutty Malaysian delight known as curry laksa (kari laksa) or simply "laksa." Less well known away from its home is a second type of laksa, a sour, fishy version known as asam laksa. In Penang, where asam laksa is the default, the local version is so tasty that Penang asam laksa was ranked number seven on CNN Travel's list of the World's 50 Best Foods.

I crossed asam laksa off my list (or, more precisely added it to my list of delicious things to be on the lookout for wherever I happen to be) with a visit to San Francisco Chinatown's Penang Garden Restaurant. Penang Garden has been around for nearly 10 years, but it's a restaurant I tend to overlook because it's right here on my own turf and therefore doesn't promise the reward that comes with the journey. Its facade has become a bit weathered and sun-bleached and that, along with a Tiki-ish decor and the flowered short-sleeve shirts worn by the servers conjures up a suitable tropical setting. 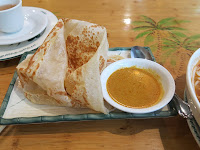 Penang Garden's menu offers Penang Assam Laksa, precisely the variation that wowed CNN's travel writers, and that's what I ordered, along with a side order of roti canai. My laksa arrived as pho-style rice noodles in a broth red from chili pepper.  "Asam" is the Malay word for tamarind, and that is the basis for the sourness that meets the spiciness in Penang asam laksa.  This "hot-sour" soup is also made fishy by sardines, chunks of which lurked in the broth.  Toppings included thinly-sliced cucumber and red onions, as well as mint leaves and a healthy dollop of shrimp paste.  Chunks of fresh pineapple also appeared as a garnish, augmenting the tartness. I couldn't divine what else contributed to the complex, pungent broth, but it may have included lemongrass and/or galangal, both traditional seasonings for Penang asam laksa.

I've enjoyed hot and sour soups before, and sour fishy soups, but I can't recall experiencing spiciness, sourness and fishiness each vying so determinedly for attention within the confines of a bowl of noodle soup before. I have no benchmark for Asam laksa, this having been my first taste, but the performance of the three flavor elements in unison I which experienced at Penang Garden was a revelation, and a show I hope to come across again in my wanderings.