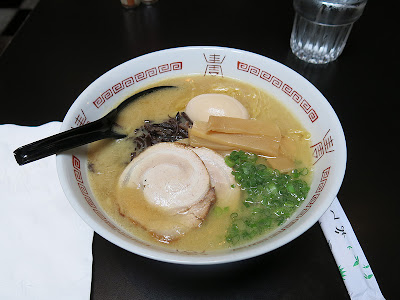 When you're an obsessive ramen chef whose ramen has already made the grade but feel compelled to move it forward, there are couple of ways you can go. You can throw in some dorm hacks and see if it floats anybody's boat, or you can hit the books.  Leonardi Gondoputro, whose Kirimachi Ramen made 7x7SF's pick list of the top 7 bowls of ramen in San Francisco in its first couple of months of existence, takes the latter course. Last fall, he went to Japan for some informal ramen study with practitioners  and returned with a recipe for kuro (blackened garlic) ramen. At the beginning of March of this year he returned to Japan (bringing wife Febry Arnold along for moral support and shopping) for a week-long  ramen school (who knew?). Back in SF he hit the ground running and not only reworked all his broths, but introduced another new item, Tori paitan (milky chicken broth) ramen, which I stopped by to test drive. 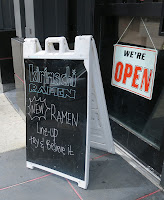 Tori paitan is not your wimpy chicken miso broth. It's a rich, golden tonkotsu-like broth but made by long, slow simmering of chicken bones and chicken parts instead of pork bones.  ("Ramen Dreams" chef Keizo Shimamoto says "tori paitan" just means "boiling the dickens out of chickens" in a recent Asia Society blog post.) I'm not a big fan of tonkotsu ramen broth; the fatty unctuousness is often  more than I want to handle. Tori paitan broth, however, at least from the ladle of chef Leo, is a bit lighter, and the unctuousness is a better "look" for chicken than for pork (think of fighting a cold with "Jewish penicillin" and the comfort it brings). It was good enough that I slurped it all down.  The chashu (yes, you I-only-eat-chicken folks, the protein is sill pork) was, as usual, meltingly tender, the soft-boiled egg cooked just right, and the noodles springy and toothsome.  Kirimachi will make a ramen lover of me yet.

Chef Leo also mentioned that he had reformulated his tonkotsu broth and now is serving a "Tokyo-style" tonkotsu ramen (something I didn't know existed).  It'll provide a good excuse for me to return soon and satisfy my curiosity.

Chef Shimamoto, in the above-cited article, said that tori paitan is the house specialty at Totto Ramen in New York, which he rates as the best ramen joint in the U.S. Personally, I can't imagine eating tori paitan ramen in July in New York, but San Francisco has no real seasonal constraints. Just remind yourself that "Kirimachi" means "Fog City" in Japanese and dive into a bowl.