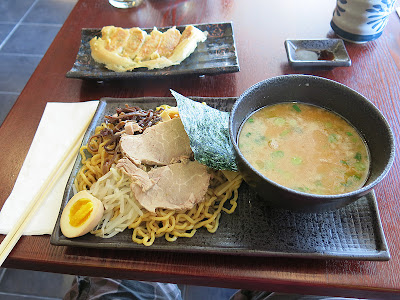 Waraku Ramen Dining recently opened in the Post St. space that formerly held Bushi-Tei. It's the latest venture of Eiichi Mochizuki, the hyperactive chef who brought us Hime, Men Oh Tokushima Ramen, and a half dozen Shabuway franchises from here to Los Angeles.  I'm not OG rameniac enough to rush to every new ramen-ya opening, but Waraku sucked me in with its promise of tsukemen, the "dry" ramen that's said to be the rage in Tokyo these days. It's a rarity hereabouts, so far, though I did enjoy a tasty version at Kirimachi Ramen.

Tsukemen feaures cold or room temperature noodles and toppings alongside a hot broth for dipping. (Some versions serve some of the toppings already in the broth.) Waraku's version features fat (by ramen standards) noodles, a couple of slices of chashu, half a soft-cooked egg and the usual ramen topping suspects.  The "dipping sauce" comes in a bowl large enough for a serving of conventional ramen. In fact, as the picture above shows, what's served at Waraku resembles a complete deconstructed bowl of ramen.  So what's the point of it all?  I've asked myself the same question and came up with the following answers, so far: 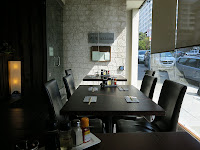 In general, tsukemen seems to be pitched to the ramen eater who looks to the noodles more than the broth for satisfaction. That would be me, see. But how did Waraku's tsukemen work for me?  I found the noodles to be the best part, robust and pleasantly chewy. For that, credit goes to the noodle maker (whoever that may be) as well as to the person that didn't overcook them. The chashu was lean and tender, but lacking in flavor, as it it had been steamed rather than roasted.  The soft-boiled egg was a little overcooked, and didn't reveal any of the promised smokiness. The broth/dipping sauce was something of a disappointment. As described on Waraku's menu, it is a "tonkotsu and fish based dipping sauce." To me it seemed an overly salty tonkotsu broth.  Although inoffensive, I would have expected something sharper and more complex and exciting for dipping, as was Kirimachi's tsukemen dipping sauce on my visit there; in contrast, what was served by Waraku as a dipping sauce seemed, in quantity and character, something intended for slurping once the noodles were gone.  It was, however, too salty and fatty for that purpose.

My search for well-rounded tsukemen will continue. Ramen-yas, bring it on!