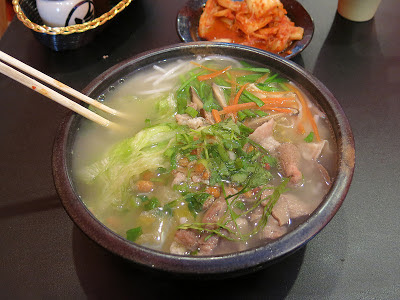 21 Taste House House ("Grill & Noodle Cuisine," it says on the awning) has been open barely a week on Ocean Avenue in the vicinity of City College. Some early Yelp notices, which were more evocative than informative, piqued my curiosity, so I set out to check it out without fully knowing what to expect. 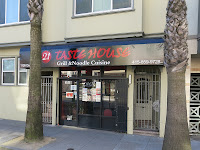 I found 21 Taste House jam-packed with (mostly Asian) students from nearby City College at 1:00 PM. I was given a seat at a shared table, and a colorful, multi-page menu to peruse. Therein I found appetizers, including kimchi and gyoza, grilled meats (both on and off skewers), various rice plates and, most importantly to me, Yunnan Rice Noodles, as proclaimed in the largest section of the menu. There seemed to be a dizzying array of choices for toppings for both noodles in soup and "dry" noodles, but they got me immediately at lamb. I ordered a bowl of rice noodles in soup with sliced lamb shoulder. For good measure, I also ordered a kimchi appetizer, which proved to be fortuitous.

My mixian noodles (as rice noodles are known in Yunnan) arrived in a heavy stoneware bowl (a nice touch) and was the size of a "large" order in the two-tier scheme popular in Vietnamese restaurants.  The slices of lamb shared space atop the noodles with cabbage,  cilantro and some other unidentifiable greens, shredded carrots, and a few boiled peanuts, a characteristic Yunnan mixian apparently shares with its cousin Guilin mifen.  The soup-to-noodles ratio seemed higher than I am used to;  when I had finished eating most of the solids, the bowl appeared nearly as full as when I started. I don't know it this is typical of  how Yunnan mi xian is served, but given the overall size of my order I didn't feel slighted.  The lamb slices were tender, and the portion adequate if not overly generous.

If I could find one fault with the soup, it would be that the noodles appeared to be overcooked, and were soft, tending toward mushy. Since it was the restaurant's first week and the kitchen staff was probably as harried as the servers seemed to be by 21 Taste House's instant popularity with the students, I'll give them a mulligan this time around. Another failing, more of service than of cooking, was the lack of chili oil or chili paste in the condiment caddy.  I found my soup's broth a little bland for my tastes, and wanting to jazz it up a bit.  Fortunately, my side order of kimchi was decently spicy, and I ended up dumping most of it in the soup, which ended up being a genius move.

I'll definitely return to explore more rice noodle soup options on the menu. To tell the truth, once the lamb (always my first choice) grabbed me, I didn't even think to check to see if "Cross the Bridge" noodles were offered.