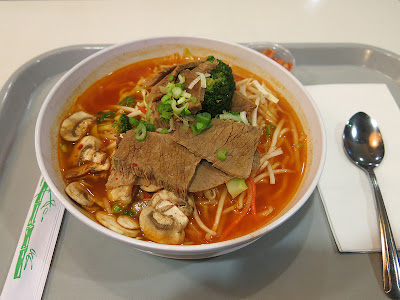 I started my search for lunch today with a loftier aim than food court noodles, heading to faraway Parkside to chase down a rare noodle specimen, Xinjiang Ding Ding Chao Mian by the Xinjiang-trained chef at Shandong Deluxe. Alas, as I discovered, Shandong Deluxe is open for dinner only on Mondays.  I quickly improvised a Plan B: I would return to my latest discovery. 21 Taste House to try another Yunnan rice noodle specialty, and while there determine if  "Crossing the Bridge Noodles" are on the menu, or available off-the menu. After backtracking to West Portal station and grabbing a K Car to Ocean and Lee, I was met with disappointment again: 21 Taste House was closed for MLK Holiday (d'oh). Devoid of further inspiration, I jumped on a downtown-bound K Car, debarking  at the stop for Westfield San Francisco Centre, with its convenient bathrooms and multiple food courts. Since it was now 2:30 in  the afternoon, I vowed to get my noodle fix before leaving the mall and headed for Sorabol.

Sorabol, for those not familiar with Northern California, is a local Korean restaurant chain which dates back to 1979 and claims to be the first restaurant to introduce authentic Korean cuisine to Northern California.  There is no doubt some exaggeration to this, but its "Sorabol Korean BBQ and Asian Noodles" mall outlets, which the firm started propagating in the 1980s, are definitely pioneers in the area of quick service Korean food and Asian noodle restaurants. They tend to be extremely popular for their large portions and low prices, and the outlet in the eastern basement food court of the Westfield San Francisco Centre is no exception. 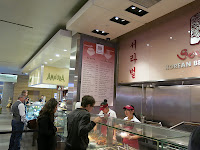 The way my day was going, I couldn't even order a bowl of noodles at a shopping mall food court without a hitch. When I placed my order,  I thought I was ordering "Spicy Beef Soup (Yuk-kae Jang)" on the menu. Since I miss-spoke my order as "Spicy Beef Noodle Soup" I ended up with the more generic "Beef Noodle Soup" on the menu. (Yuk-kae Jang also has noodles in it, albeit "cellophane" or "glass" noodles.)  Sorabol cooks noodle dishes to order (an endearing feature) and by the time mine were ready and I discovered the mixup, I was too hungry to backtrack.

The "Beef Noodle Soup" (not the "Spicy Beef Soup") on the Sorabol menu resembled a Taiwanese or Chinese niu rou lamian with "la" style wheat noodles and dry, thin slices of beef similar to what one might find in a "Lanzhou lamian" in Shanghai.  The noodles were toothsome, if anything slightly undercooked, though I definitely prefer them that way to being overcooked.  There was an ample quantity of beef which, though dry, was not tough.  The savory (though not at all spicy, despite its red color) broth was enhanced with a copious amount of mushrooms and (sob) some broccoli florettes, which do not belong in any dish in any cuisine. (I'm 71 years old and don't have to eat my broccoli). It may not have been the exotic specimen of noodle culture I set out looking for, but my large $7.95 bowl of noodles at Sorabol was noodle fix-aplenty, once I got down with it.