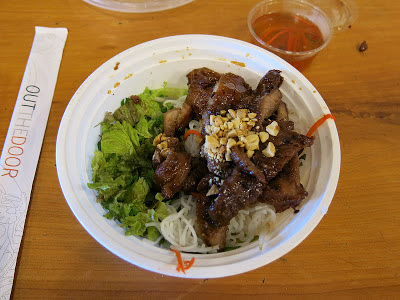 I found myself in the not-so-hospitable confines of the Ferry Building this afternoon hungering for something of a noodle-ish mien for a late lunch.  The options were the (seemingly moribund) Imperial Tea Court with its signature spicy IMPORTED from Taiwan (emphasis theirs) noodles for about 12 bucks, or a rice vermicelli plate from Out the Door for a bit less. Since I was sure that OTD's noodles hadn't been imported from anywhere further than San Jose, and a cold noodle dish sounded good on an 80° day (which it was, believe it or not), I went with the Vietnamese option.

I was half kidding (or maybe three-quarters kidding) about "the other half" in the title of this post. It might be a fair characterization of hipster patrons of Out the Door's big sister, The Slanted Door, which features "gateway" cuisine with designer ingredients and designer prices, accompanied by pricey designer cocktails.  Out the Door, however, is at least halfway out the Slanted Door onto the street where real food might be found, and its prices, while not at Little Saigon levels, won't make one blink.  A basic vermicelli bowl with pork, chicken or shrimp toppings will set you back about as much as a bowl of ramen without extras at an aspiring new ramen-ya.

I chose the "Lemongrass Pork With Vermicelli" (which I'm guessing would be called bun thit nuong in the hood).  Chicken and shrimp versions are also available. In toto, the bento-like plastic container amounted to a fairly light lunch (something I looked forward to after a couple of gut-buster noodle lunches at Shandong Deluxe recently.  However, I was struck by the generous quantity of savory grilled pork, as much good lean pork as one would have the right to expect in a noodle bowl of any denomination. The pork had a nice char, the cold rice noodles ere refreshing, and the veggie greens rounded out the dish nicely. In the past I've found myself disparaging Out the Door, largely on account of its kinship with The Slanted Door, which I'm not a fan of, but I found today's lunch satisfying and even reasonable, by Ferry Building standards, and can see myself returning. Perhaps the mini-empire of Out the Doors is Charles Phan's attempt to Keep it Real, which he does, kind of. 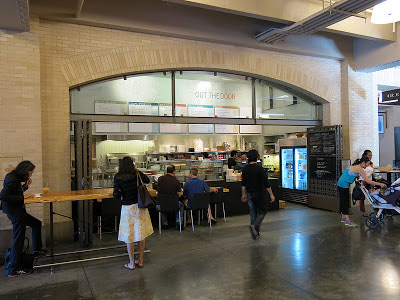 Where slurped: Out the Door, 1 Ferry Building #5, San Francico
Posted by Gary Soup at 9:13 PM