A Subterranean Food Court, A Bowl of Bun Bo Hue, And Another Round-eye Runaround 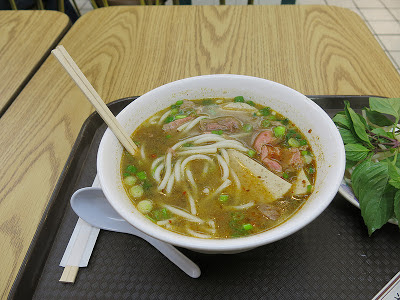 The International Food Court at Bush and Kearny isn't exactly the Heaven-sent and Heavenly-scented rabbit warren that is the Golden Mall Food Court in Flushing, New York, but it has a promising close-to-the-bone feel and a rainbow palette of ethnic cuisines on offer.  There's one vendor each for Mexican, Chinese, Japanese, Vietnamese, Filipino, and (soon to come) Korean foods, mostly serving foods their respective homeboys are craving, assuming you overlook the Crab Rangoon add-on option at Lee's Kitchen. 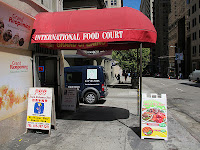 I was both optimistic and curious as I descended the stairs at the Bush Street entrance to the IFC for my date with a bowl of Bun Bo Hue: optimistic because a Chowhound.com message board poster had reported getting a bowl of Bun Bu Hue with cubes of pig's blood in it  there, and curious to find out if I would be served the same thing at, of all places, a food court in the middle of the Financial District.

People who know such things will tell you that cubes of congealed pig's blood are one of the hallmarks of an authentic bowl of Bun Bo Hue, along with pig's knuckles, preferably whole and on the bone.  I know from experience that Vietnamese restaurants will hedge on this in the U.S., even in the Little Saigon environs of San Francisco.  Some, like Mangosteen, omit the pig's blood altogether; some, like Ngoc Mai will selectively omit the pigs blood if the bowl is headed for a guilao like me.  Others, like Sao Bien and Ha Nam Ninh include the pigs blood as was meant to be, without misplaced concern for Western sensibilities.  I had no clue as to the ethnicity of the Chowhound poster; would I be served the same bowl he or she had? 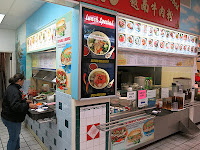 At Pho Express you order and pay at a small window on one side of the enclosed stall, then wait for pickup around the corner at a counter with condiments and pre-assembled plates of garnishes. There was a line of a half-dozen people and a 10-15 minute wait for my bowl even well past lunch hour at 1:45, an indicator of how busy Pho Express is.

Pho Express serves a single size of soup, and I'm guessing my $7.95 bowl was between a "small" and "large" serving at a conventional pho emporium.  The broth had a decent depth of flavor, though not particularly complex and only mildly spicy.  It was also a little on the oily side.  The noodles were thick, almost udon-sized, which I like, but alas, they had been cooked to death and were mushy (and a skimpy portion to boot). As far as the toppings went, Pho Express was most generous with the sliced pâté; there was also a reasonable amount of sliced rare beef, and what appeared to be bits of pig's knuckle (off the bone).  And oh, yes, there was no pig's blood in my Bun Bo Hue.  I had been given the round-eye runaround again.