You could call it Chinese Cioppino: Chao Ma Mian at Shandong Deluxe 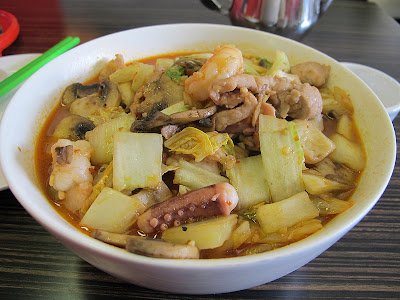 Chao Ma Mian, like Zha Jiang Mian is a noodle dish with an identity crisis. Is was born in China, exported to Korea via Shandong Province then reimported to China with Korean characteristics, notably an elevated spice level. To complicate matters further, chao ma mian is similar enough to a Nagasaki ramen variant known as champon (itself an import from China's Fujian Province) that the Koreans call the dish jjamppong. 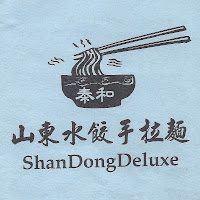 Whether you call it chao ma mian, jjamppong, Champon, gumbo, or (as occurred to me) Chinese Cioppino, it's a belly buster when combined with Shandong Deluxe's already legendary portion sizing, as I discovered when I  returned to the restaurant to check out the dish today. As can be seen, a mountain of surf, turf and garden goodies blanketed an equally impressive mass of fresh, springy handmade noodles on steroids (no wimpy ramen noodles here). So much do I like Shandong Deluxe's noodles that I found myself impatiently chomping my way like Pacman  through the chicken, pork, shrimp, octopus, cuttlefish, cabbage and a host of other things I didn't stop to catalog to get to the wheaten treasure awaiting me. Not that I had to hold my nose to do so; the toppings were fresh and savory, the textures thoughtfully varied and broth pleasantly spicy.  At $6.95, the bowl could easily covered lunch for two people circumspect about their calorie intake, or fuel a slightly overweight urban hiker for the greater part of a chilly Winter day.