Slurp du Jour: Shoyu Ramen from a Ramen Pop-up in a Salvadoran Restaurant 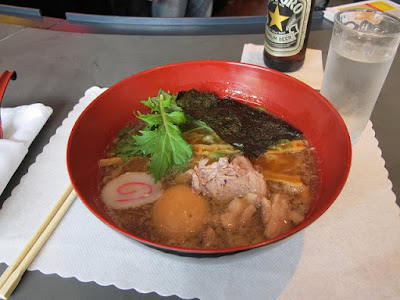 I don't know if I'm trying to expand my ramen knowledge at the very (presumed) top, or just trying to capture a shooting star before it burns out, but for the third time in a row my bowl of ramen came with a double-digit price, even before any tax, tip or ancillary indulgences. This time it was Ken-Ken Ramen, a Monday night pop-up at a normally Salvadoran and Mexican restaurant, Panchita's #3, and named, apparently, for chef Kenji Miyazaki.

I got there tonight a few minutes before the announced starting time of 6:00, and sure enough, the Ramen lantern was hung outside of Panchita's. I was seated at the bar, the first person to be directed there, even though most of the two-tops were unoccupied. It soon became clear why: within half an hour there was a butt in every seat in the joint and a line outside. 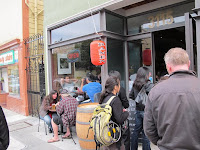 As of the moment, the Ken-Ken menu offers a choice of miso, shoyu, or miso vegetarian ramen, and I chose the shoyu. The non-veggie bowls were topped with chashu, mizuna, nori, a soft-boiled egg, bamboo shoots; fish cake and Spring onions. All bowls were $11.00, three bucks less than I paid for a bowl of ramen at Ippudo in New York a few weeks earlier, or a dollar more than I paid for a Hapa Ramen styrofoam bowlful more recently. Compared to either, it was a relative bargain. It came with a free edamame appetizer, was a much larger serving than Hapa's, and came in a real stoneware bowl. Compared to Ippudo's, there wasn't much my novice ramen palate could find to distinguish between the two for tastiness. Although shoyu ramen broth is soy sauce based, it wasn't as salty as I'd feared, possibly not even as salty as the miso broth might have been. It was a clean, savory taste, not as muddy or fatty as Ippudo's (which, to be fair, was a tonkatsu broth). The noodles were curiously yellower than one would expect, but not noticeably acrid from kansui, and cooked just to my liking, on the firm side of al dente. The toppings were generous enough to be filling, though I wouldn't have minded a teensy bit more chashu, since you asked. There was an extra chashu option (for $3) but no extra noodle serving option.

Ken-Ken is a venture I might visit again (after my next big 401k bounce) to check out the miso ramen, though in the interim I need to visit some more proletarian ramen venues to recalibrate.