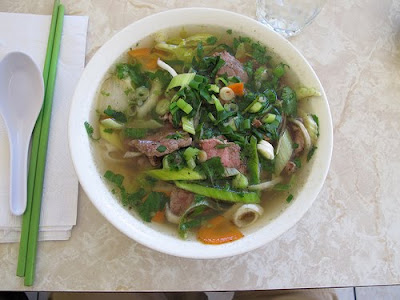 I find it hard to walk through the Little Saigon district on Larkin St. without stopping in at Turtle Tower restaurant. Yesterday, on my way to the Asian Art Museum I succumbed to its lure. Not that I have any guilt feelings, however: when I eat pho, especially the northern version (pho bac), I cultivate the impression that I am eating something relatively healthy, compared to, say, the fatty saltiness of ramen.

I settled on the Pho Tai Lan, lightly stir-fried lean beef slices with celery, carrot, onion and leek. As is the case with northern-style pho, the noodles were wide and flat, the broth subtle and minimally spiced, and the little garnish dish held only a lime wedge and jalapeno slices. The slippery noodles were cooked just right, and I only dared use about a third of the jalapenos lest they overpower the subtle beefy goodness of the clean broth. The only discordant note was the carrots, but that's just me. I am not a carrot fan. The man sharing the table with me (the place was packed, even at 2:30 in the afternoon) was apparently not a carrot fan either; after emptying his garnish dish, he filled it with sriracha which he proceeded to use to dip the carrots from his pho ga in.